Serial.list() hangs if 32bit export is run under 64bit Windows

Is there any way to fix this on my side, short of distributing two versions for 32bit and 64bit?

The file “jssc.txt” in the exported app states “This is using a modified version of Java Simple Serial Connector by Alexey Sokolov”. Is there a better version?

I remember having had the opposite problem with older Processing versions that used rxtx.dll instead of jssc.dll: Exported apps didn’t work until rxtx.dll was replaced (back in those days it worked under Windows 32bit and not under Windows 64bit, now vice versa).

hi, i try to follow, and i think that i am actually NOT answering your question,
still i want show what i try here:

now i use following sketch:

when i export it from the 64bit processing only the 64bit app runs, the 32bit app has no Java, try to use the PC Java and fails.

when i export it from the 32bit processing only the 32bit app runs, the 64bit app has no Java, try to use the PC Java and fails.

well as i said, that answers your question only insofar

but as you mentioned you actually not want deliver both apps

It’t less a matter of not wanting but one of not being able to do that (hundreds of customers and each gets his/her own downloaad with individually licensed Mac/Win/Android/Linux apps => that already adds up to gigabytes). I’m running out of web space. Bundling Java would be totally out of the question.

I think I have found a solution:

Now it works (i.e. the win32 executable works under win64; not yer tested under win32). The funny thing is that now even freshly exported 32bit Processing apps with serial functions work under 64bit Windows, without replacing anything. It guess this old jar has installed the jssc dll somewhere on my system where it overrides the dll in the exported apps (?).

the 32bit app has no Java, try to use the PC Java and fails

I don’t have that specific problem.

I used SerialDuplex in the examples to test this. 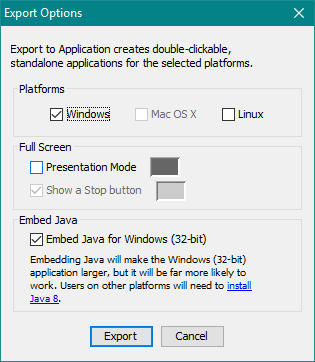 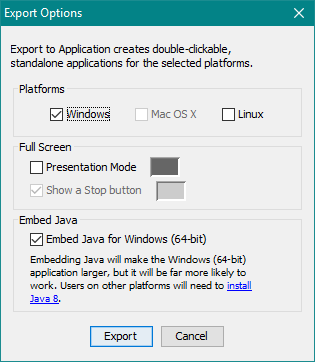 I did observe that the two folder are created each time and the previous contents are lost.

Do a search for “file: jssc*.dll” and see what turns up.