Hey,
I’m Pedro Féo, a software engineering student from Brazil, I’ve been wanting to work with the p5.js web editor for GSOC. I wanted to work on the mobile/responsive design implementation. Alongside with that I would like to validate the design making a series of usability testing, mainly to see if the mobile version is as successful as the desktop one, bringing new ideas to how to implement it too.
I would like to know what do you think about this.
Thank you

Hi @phe0 – glad to hear that you are interested in working on the web editor for mobile.

When you say “usability testing” what do you have in mind? Would this be general logging software, or creating logged tasks, or a protocol / design for a usability testing project…?

The idea is to go through this cycle as much as possible for the time of the project, making the mobile version as good as possible.

Interesting – so you are proposing to conduct actual usability tests as part of the GSOC project? Have you designed and run such tests in the past? Who do you imagine as being the test subjects / participants?

Yes, I have run usability tests before. I’ve had classes at the university about it and have run it before in some other projects. I was thinking about having freshman from the university, since most of them will be having their first contact with coding , and people who are already experienced with code too, so that we could have a good mix of skill levels to test with.

Hi @phe0 – I have asked the GSOC mentor community and they suggest that a plan to conduct usability tests during the GSOC period should not be included in a proposal.

Some concerns are that:

That said, you could plan to pursue a usability project in your university AFTER GSOC is over using your work. Still, it is probably not a good idea to propose user tests as part of your proposal / work plan. Tests might raise red flags and lead to proposal rejection by the program even if the application was otherwise strong.

To be clear, this is not an official statement by Google, GSOC, or the Processing Foundation – I am just passing along advice from past program mentors.

Keep in mind that I am not a p5.js core developer, and I don’t work on the website, so this is just my opinion – but I think proposing a new design (with new features, and /or incorporating feedback that you have received) is a great idea.

Also, to be clear, I’m not suggesting that you don’t ask people what they think about UI designs. Feedback is great! I’m just suggesting maybe don’t include a formal usability study in your GSOC plan – unless a Foundation mentor for p5.js contradicts me and to go for it, of course!

Hey @jeremydouglass,
I’ve worked on a prototype of the mobile version of the p5.js web editor.
Can you take a look?
Prototype link: https://www.figma.com/proto/qQdTcNxMT2jcyDjnUR9jEt/p5.js?node-id=1%3A106&scaling=min-zoom

Where will the “Play / Stop” buttons go?
How will the user toggle to the preview view?
Will there be a console?

the prototype is interactive, if you click on the play button on the bottom right of the page you’ll go to the preview and console section 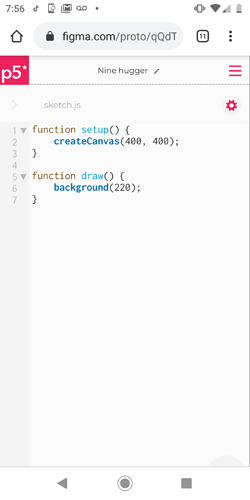 oh, I think I fixed, but it’s only a prototype anyway, the idea is that it stays fixed on the bottom right of the page

@jeremydouglass @saberkhan @lmccart @shaharyar , as I’m working on my proposal, I would like to ask for some feedback in my current proposal.

The p5.js web editor sketchbook Pedro Henrique Andrade Féo pheofo@gmail.comGithub Linkedin Website Project Abstract Part of the greatness of art is that you can do it anywhere, you can bring a sketchbook and a pencil and sketch wherever...

Your feedback would be really helpfull.
Thanks

thanks, I’ve changed it