Sending MIDI information to my DAW

I want to send data from my sketch into my DAW, more specifically, Logic Pro X, using the midiBus library, but I do not know how to access the appropriate midi channel to make this happen. When I create an Aggregate or Multi Output device in the Audio Midi Setup of my Mac, it is not recognized by the MidiBus().list function on processing. Does anybody with any experience on this can help? Has anybody successfully linked up Processing with Logic Pro X, or any other DAW for that matter (assuming that the general principles translate)?

Hi! Funny: a similar question from yesterday but for Linux:

Hi everybody, I’ve created a MIDI control GUI in Processing that I would have liked to link to Reaper to control some automation by sending MIDI CCs (using the MidiBus library). Unfortunately, different from what I expected, I’m unable to exchange MIDI messages between the GUI and the DAW. I’m using Jack and a2jmidid. This is a screenshot of the following processing code line myBus = new MidiBus(this, 1, 2);: [processing_midi] This is a screenshot of my current audio midi setup: [process…

I link it here in case some of the tips are useful on Mac too.

Similar, but the answer I gave was quite Linux specific (although JACK does have a Mac build)

@LordCacops firstly have you set up a MIDI loopback / virtual port? Eg. http://www.johanlooijenga.com/tools/12-virtual-ports.html Not quite sure from your post.

Secondly, you may like the other post be finding one of the limitations of JavaSound MIDI. It used to be very limited on Mac although has improved a bit. Because of that I know there are a few alternative JavaSound MIDI implementations around. I haven’t tried it but you could have a look at https://github.com/DerekCook/CoreMidi4J

I created a virtual port. It was not detected by the “Basic” sketch among the MidiBus’ examples. I figured thats because of the limitations of JavaSound MIDI, so I installed the CoreMidi4J. For its installation it is needed that I place the .jar file on the class path of the project with which I want to use it. Im a total beginner so I don’t even know what a class path is, or for that matter where it is. And also, by the project do they mean the sketch from which I am trying to output the MIDI messages?

As this is a plain Java library rather than a Processing specific one, possibly have a read of https://github.com/processing/processing/wiki/How-to-Install-a-Contributed-Library

For its installation it is needed that I place the .jar file on the class path of the project with which I want to use it.

https://GitHub.com/processing/processing/wiki/How-to-Install-a-Contributed-Library The top folder of a library must have the same name as the .jar file located inside a library’s library folder (minus the .jar extension): Therefore, we’re free to choose whatever name to the “.jar” file, as long as we use that same name for its top folder.

I placed the file on the libraries folder, with the library containing the .jar named like the .jar minus the extension. I tried to import it into the Basic.pde example of the MidiBus library. And yet, I cannot import the CoreMidi4J.

the error message says: The import coremidi4j cannot be resolved

That’s not what import actually does, and you shouldn’t need that line at all. Just having the jar there should hopefully improve what MIDI devices are available.

This comes out at the console:

I set the MIDI port as prescribed in this article:
http://www.johanlooijenga.com/tools/12-virtual-ports.html

as you can see from the screenshot. 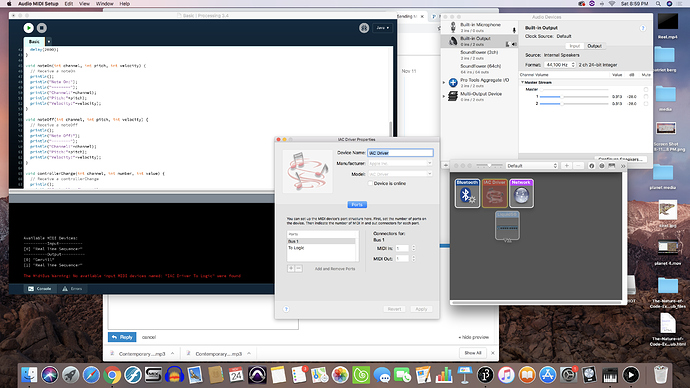 I read in the aforementioned thread that is similar to this one (MIDI: from Processing to Daw (Linux)) about the implementation of JACK Audio Connection Kit. I believe you developed its MIDI implementation @neilcsmith. Could you tell me about this? Is this a library, or something that could be used in tandem with MidiBus?

I believe you developed its MIDI implementation neilcsmith. Could you tell me about this?

I wrote the Java binding for JACK, not JACK itself, and a lot of the MIDI support in the bindings came from someone else - JACK’s primary use is routing real time audio across applications.

You can find an example of JACK MIDI-through in the JAudioLibs examples. It’s lowlevel stuff, but not that difficult. There is no JavaSound MIDI device implementation on top of it, although you could theoretically write one, so out of the box it won’t work with MidiBus.

I’ve not used CoreMidi4j but from the readme, if you’re not seeing extra devices with the coremidi4j prefix then I don’t think you have it installed correctly.

Sharing this in case it helps… I have midi messages being successfully sent from Processing to Logic Pro X, without needing to download any extra tools. Here’s the steps I followed:

That was a good checkpoint, confirming that I had created a “virtual midi cable” to send midi messages between applications.

Then I verified that the midi messages were being received in my DAW:

Yes! Logic is now beeping alright. This was quite easy. I think what I was missing was ticking “Device is Online”. Thanks a bunch for the help!