Recently I have been using Visul Basic for Apllication (VBA) and I made a userForm with it. Even if i didn’t enjoyed too much VBA I fallen completely in love with the ease of use of some tools inside it, you can make something like this with just a few clicks 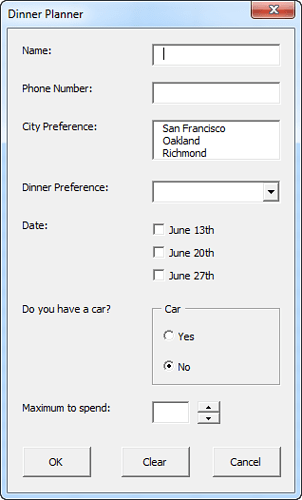 I was wondering if something like this exist also in Processing, if not this should be made
an example of what i mean bringed to processingfor the check box

If somethink like this would be made for combo box, text box and command button the ease how people make code would improve a lot

all these functions could go inside a library

Processing already has several GUI libraries, the most commonly used (based on number of questions I see in the forum) are controlP5 and G4P, both are long established and well supported libraries. G4P was first released on 22nd March 2009 so will be celebrating its 10th birthday soon, and controlP5 has been around longer still.

Now I must make a confession, I am the creator of G4P so am a little biased but G4P also has a visual design tool called GUI Builder. Both of these can be installed via Processing’s contribution manager also my website has extensive support for both including video guides to using GUI Builder.

@quark I needed to discover your library before

I really like it and it has all someone would need

I would practice with both G4P and GUI Builder before trying to adapt an existing project. It will make it is easier to learn.

yep, I passed the last half hour to test it

for sure i will use the button and combo box which are quite easy to implement, i remember that i had a lot of problems writing the scroll bar, if only i knew your library before

if only i knew your library before

That’s funny because when I first found Processing back in 2008 I thought it really needed a GUI library so I started on what became G4P and it was first released on 22nd March 2009 (almost 10 years ago) .

it was only later I discovered an existing library, controlP5. If I had discovered it earlier would I have created G4P, who knows.

I think that i discovered Processing 3 years ago, but i didn’t find your library because at that time i didn’t had any idea what a GUI was

Anyway is your library “compatible” in python mode? I found this, but maybe the situation has changed https://forum.processing.org/two/discussion/21913/using-g4p-on-processing-py

P.S: if you accept a suggestion you should put an example of one GUI made with your library that has a few of your tools (check box, drop list, slider, ecc)

Anyway is your library “compatible” in python mode?

No it is not. Although the discussion you link to suggests it might be possible, I have never used Python so the learning curve to make it compatible would be huge.

if you accept a suggestion you should put an example of one GUI made with your library that has a few of your tools (check box, drop list, slider, ecc)

I am always ready to consider suggestions and although G4P comes with many examples I realise that some of them are too complex for a beginner.

If you or any other forum member would like to create some good quality examples suitable for newbies I would certainly consider including them in the next release or on the website or both. Full credit would be given to the author(s) in the sketch comments or on the website.

No it is not. Although the discussion you link to suggests it might be possible, I have never used Python so the learning curve to make it compatible would be huge.

I understand, maybe one day it will be 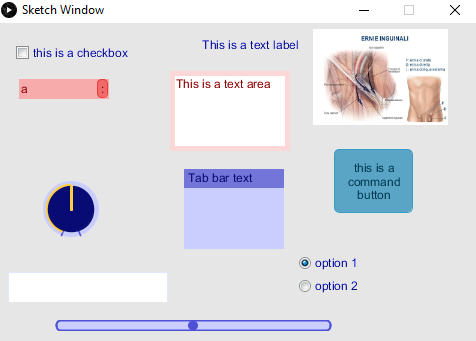