Hi, I’ve been using Processing for several years and recently updated to version 4.0.1. It’s fantastic except that all of a sudden every sketch window is scaled up 200% of true screen resolution! This happens on both monitors for my Windows PC (primary 3840x2160, secondary 1680x1050) and also my M1 MacBook, display 2560x1600. Never had an issue with this in the past on either one…

Turning on “Disable HiDPI Scaling” (which is only available in the Windows version) just makes the IDE half the size which is unreadable, and the sketch still renders double size. How do I fix this??

Hello everyone, I got this problem. When I’m working on Mac, I can see my design in sketch screen as exactly as I coded. But then when I try to open in my Windows laptop, I see the screen size different. In my last draft I mentioned below, I can see the whole screen on Mac but on my computer it only appears half above my screen size so i can’t even see the close button so I can’t drag and can’t see what I did as a whole. How can I solve this problem? [ice_screenshot_20220810-195120] /** * Ex…

Thanks,
Looks like that thread is referring to the location of the window and not the scale. The “scale” function is used, but as far as I know that’s just a render transform. He also mentions the window is a different size, but it likely matches his monitor, whereas mine does not. For me, everything is fine except that the width and height are twice as many pixels on screen as it says in the code - for example if I set size(500, 500) and screenshot the render window, the screenshot is 1000x1000. Again, this happens on Windows and Mac after updating to 4.0.1 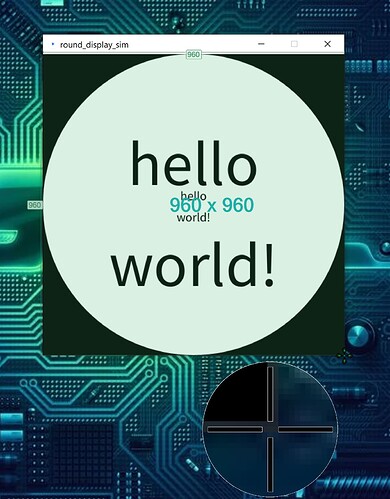 Does changing pixelDensity() do anything?

Good thought, but looks like not… I can change it to 2 which of course just makes the issue twice as bad, but it doesn’t seem to support 0.5 as a value.