Previously @sableRaph posted his tool for vanilla processing. I’m in the process of providing an equivalent for JRubyArt and PiCrate. Here is the tool in action using the atom editor:- 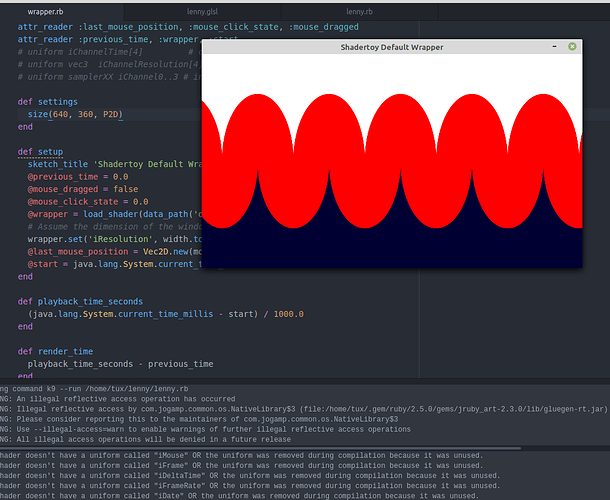 Note you get a list of unused parameters when run the default shader that you the easily remove with the open editor. In a more refined example I expect to make use of an ERB template.

Would be nice to have a JRubyArt mode in Processing’s IDE as well !

Tyfda san had a go at creating a ruby-processing mode, but I don’t think it would work well. JRubyArt and my other ruby-processing projects make it a strength to use ruby methods in preference to processing methods. The processing ide and its environment is somewhat antithetical to JRubyArt which is distributed as a ruby-gem and compatible (as is JRuby) with both gem and jar libraries. Also not being bound to an ide means that JRubyArt code is amenable to static code analysis using such tools as rubocop and reek which can be accessed from atom and geany code editors for example.