I’m on the hunt for a program that was created a few years back.
Below is a video that shows the app.
I used to have it but then I went and replaced my computer and thought I could download it again but it’s not there anymore.

I’m starting to recreate the app but it’s taking me MUCH longer then I was hoping.

OH - and yes, I have contacted all the people involved with the original project (either they don’t have it - or they haven’t responded to me).

Do you know the precise name of the application, or the original file name? Was it called “Projected Silhouettes?”

I don’t know the application name.

Would it be hard to remake? You should write what the code used to do. Write it down and that is a good starting point, a good attack plan.

From the comments on the Vimeo video, it looks like it was called the Projector App, and the file was called Projector.zip

And it was original here:

I finally took a closer look at this, and it is a neat little screen geometry app. It looks like it uses ControlP5

and is based on the ControlP5tab sketch

with a global last mouse click variables and several sliders per tab.

Yeah, it’s a pretty cool app and I feel so stupid for loosing it. I’m slowly (very slowly) trying to recreate it, I’m new to the language so I’m on track to complete when I’m 80.

I might be able to give you a hand if you like, as this is related to some code I am already working on. Can you say something more specific about your use case? Are you using all the features shown in the video demo? Did you / would you augment it in specific ways, e.g. with image masking?

That’s super generous, and I’ll take you up on the offer.

I’m a photographer and I use it just the way they display it in the video.

I was hoping to find the source code so I could enhance it with adding additional shapes, color, and potentially image overlay. Since the code was created so long ago I assumed the code(process) has had many improvements

I do really want to do a bulk of the coding myself, but I’m going to need a “mentor”/support/person to cheat from.

@ima First milestone is to capture the features of this design. Second, create a github and with some documentation, people could potentially add to your code. Description, planning and details area ll key here.

I have written a new app inspired by the one in the video, using Processing 3 and the ControlP5 library.

Since the goal is to make it easily extensible I created a render mode class for writing as many new display modes as you want, and a simple JSON file config so that you can define an auto-loaded CP5 control schemes for each new render modes without needing to hand-code them each time.

The main features still missing are the ability to save live settings back to configuration files and the ability to quick-pick presets. I may take a look at what that would entail before sharing this to a public repo. (Of course, there are many more things you could add, like combining modes, or using the modes as image masks, et cetera… also the entire thing is currently grayscale, so adding color picker support for RGB or RGBA would be interesting.) 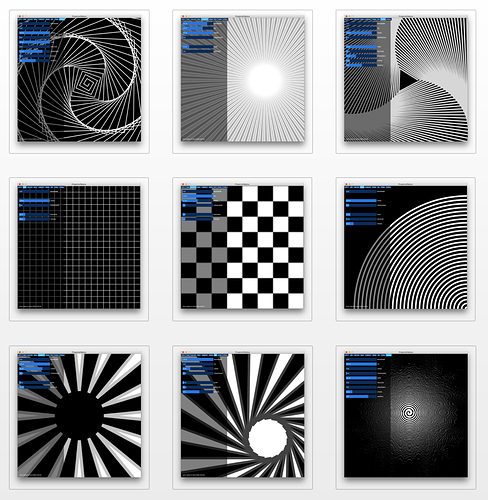 Holy-cow that’s awesome. I’m away from my computer until Monday (maybe Sunday) but I’m super excited to check this out.

I don’t know if I’m more excited to see the app or the source code.

I’ve returned to my computer (earlier then expected). Can I write you privately (email or chat) to chat about this / find the code.

@jeremydouglass Is there a good time/ place we can chat about the app.

@ima – I have sent you an invite to the private github repo.

As it turns out, cp5 already does a lot of what I was hand-coding, so I’d like to give it a major refactor before releasing it.

I also played around with adding a very simple image mask to the sketch body – that created effects like this: 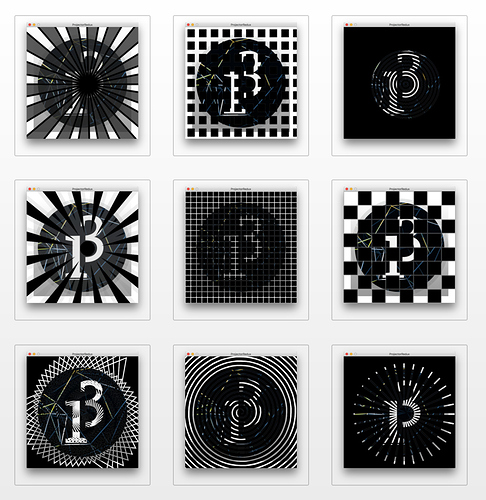