Setting up Android Mode in Processing

I am trying to set up Android in Processing. But every time I try to load or download the SDK I get a message saying " The Android SDK could not be loaded". I have downloaded the Android 9 and 10 SDK from Android Studio.
Can someone help?

I had the same error, I resolved manually putting the sdk path in the preferences.txt file of Processing. Open preferences and on the bottom you should see the link to the file. Open it (while Processing is not running) and add this entry:

Which folder in the SDK did you put the address for ?

I downloaded the sdk directly in my Processing folder. So in the preferences.txt file I inserted this:

I tried this. But every time I start Processing the path address gets removed from the preferences.txt. file.

then select this path when you start processing android mode

I’m trying to install Android mode on my new windows 10 notebook. I’m receiving an “android sdk could not be loaded” error. I moved the sdk from my previous notebook and manually pointed to it but running the sketches, which worked on my previous notebook, in the emulator which fails with a standard known message. I tried deleting everything except the sketches and reinstall but I get the error message i previously mentioned. also, the pde erased my previous sdk install. The web and forums sugge…

I tried this. But every time I add android.sdk.path to preferences.txt and open Processing, the path gets removed.

uninstall every thing and try again 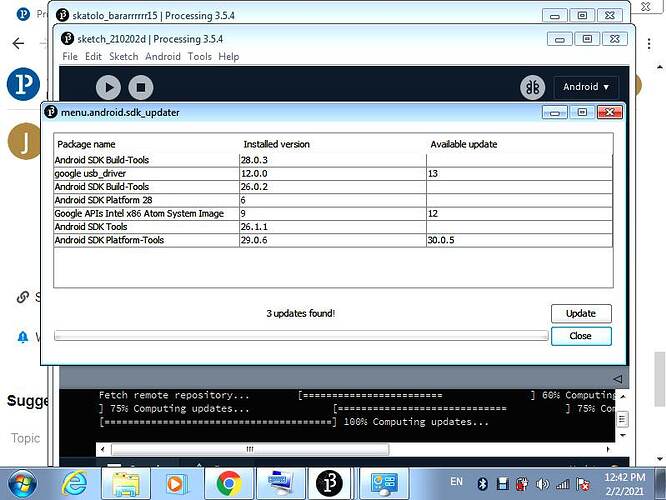 do not add any text just chose the path

Too many attempts probably caused some problem. After uninstalling everything and reinstalling it worked properly. Thank you