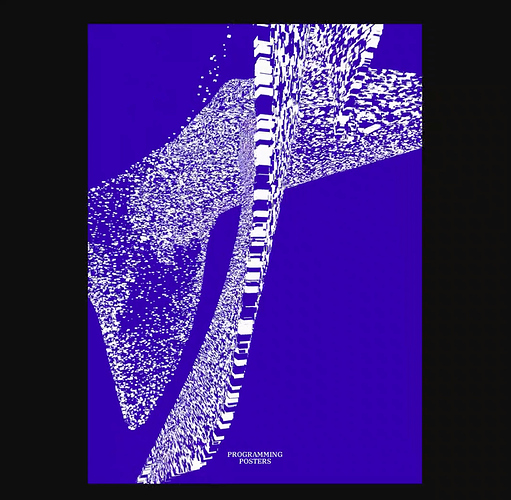 Hey folks, 11 days ago i’ve started an instagram-series called “PROGRAMMING POSTERS”: I post one poster design each day, made entirely with Processing.

My aim is to build a catalogue of generative design-ideas which can possibly end up in a publication.

If you think this is interesting for you, follow me on IG!

Followed !
Nice work, could you give us some precisions on this poster (with “black and white pixels”), how did you make it ? (using P3D, images…)

@timrodenbroeker Great work!! I love the immersiveness of the 2D canvas with 3D. Maybe you can make a tutorial that creates this effect or similar?

Are you printing these out into physical posters? I’d be curious to hear about that process, what services work well, etc.

I would also love to hear whether this project involves physically printing out the artifacts – and what dimensions / resolution / et cetera you are working with.

Thank you so much for your nice feedback! Love to hear that you like what you see. Basically i’ve created a giant Processing-project with all the posters as a separate pde. I already became very complex and performance lacks sometimes. To get a better Developer experience i use Sublime Text instead of the Processing-IDE, it has many advantages, especially that you get a much better overview for files.

This sketch particularly is based on Shiffman’s “Nature of Code”. the particle-system is based on the “Acceleration towars Mouse”-algorithm and it follows an invisible vector that is following a 3D-lissajours-curve. This vector pulls the whole system in the direction of it.

Printing, yea, that would be great! But i relized that these digital “posters” work best if they are animated, at least most of them. But i also think that stuff would like nice as a proper screen-print.

I am really thinking about starting a tutorial series. In octobre i begin to work as a lecturer at the University Rhein-Waal and i willl teach design-students to code. Would be fun to build a tutorial-series around the posters. How would you guys approach that?

Have a nice sunday!!!