I’m trying to run the “Getting started” example (Processing for Android), but after getting the “BUILD SUCCESSFUL” message in the console and waiting for a couple of minutes in which nothing seems to happen, I get “Lost connection with emulator while launching” (if I choose “Run in Emulator”) or “Lost connection with device while launching” (if I choose “Run on Device”). Someone suggested in another thread running this command:

However, the output (see screen shot) means nothing to me, as this is the first time using Processing for Android. Can someone translate this into something I might understand? Maybe something isn’t installed corrrectly, but I have no idea where to look. 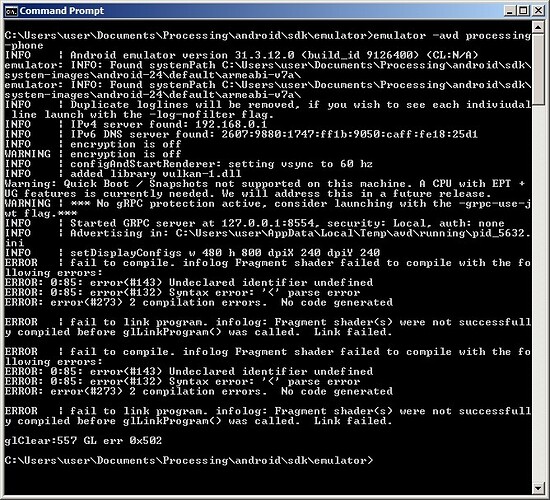 Not sure that I can solve this for you (I use MacOS). What you should have seen was your android emulator window launched, but that didn’t happen due to an error.

How could the build complete successfully if Android Studio wasn’t installed?

Anyway, I think the message about fragment shader(s) is probably due to the fact that the computer is rather old. It has an integrated GPU, but maybe it doesn’t support all the features required by fragment shaders (whatever they are). I tried installing Processing 4 and the Android SDK on a newer computer and the sketch works fine, both on the device and in the emulator. I guess my other computer is just too old. Are the requirements for running Processing for Android and Android Studio stated anywhere?