What I’m trying to do is animate the characters in a string independently of one another and have them all “home” into a centred and scaled position as one final string allowing the OS to adjust for different screen sizes. It doesn’t need to be dynamic as it’s an intro animation.

I can’t see a way to define the string and final position as a whole to allow for scaling and centring and then breaking it up into characters and re-animating it all back into the same position.

I’ve tried playing with string list to break it up but I don’t know how to the get the text function to treat that entire array as one, and if I try to use char at it will give me the character used, not the actual object of that character in order to animate it.

I kinda want to say:

So what I really want is a way to set the text position, and then find out the x and y position of each character so I can animate them all back towards that point.

Does anyone have any advice?

Forget about String and start with an array of chars

When you have objects and oop in your portfolio, very good.

Otherwise you need parallel arrays (this means, first char has its data distributed over several arrays, all in the 0th position of the arrays) for

You can calculate the initial position by using textWidth

You can’t; you need to write your own text function.

I’m not completely clear on the text effect you are describing, but here is one potentially related example:

I did it using a function that I wrote, drawLettersScatterFade(), which is demo-ed and discussed in the previous forum thread here: 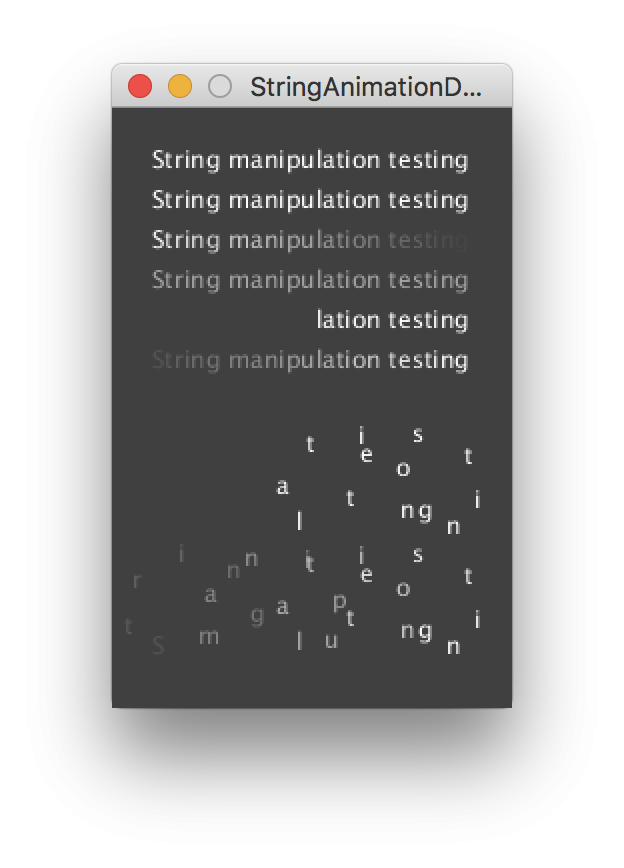 That’s really pretty close to what I am trying to achieve.

Thanks for the help guys