Everything Will Be IK (A robust Inverse Kinematics Library for Processing)

I’ve developed an extremely robust and versatile Inverse Kinematics library called Everything Will Be IK, and am making it freely available.

It supports pretty much anything you could reasonably want it to (prismatic joints are unreasonable, so it doesn’t support those), and it supports it well. Features include:

Due to the combination of its highly versatile constraint system, and its support for orientation+position effector targets, it’s extremely well suited to motion tracking and VR applications, though, if you intend to use it for robotics applications, please take reasonable precautions to ensure that your robot only explodes in the ways it was intended to.

I’ve made a processing extension of the library available here. Just follow the install instructions if you’ve never manually installed a processing library before.

The library includes examples for programatically specifying an Armature+targets+end-effectors, and for loading a prespecified Armature from a file. The examples come in single precision and double precision flavors.

Any feedback, contributions, suggestions, or questions are welcome

Thanks so much for developing this and contributing it to the community. This sounds really exciting.

Could you say just a bit more about how a Processing user might use this with a sketch? You mention programmatic control, but the video looks like mouse-controlled positioning (and/or animation keyframing?), in some IDE I’m not familiar with.

The video is of me interacting with the library inside of an animation program I’m developing. It’s only to show how well the solver behaves.

As for how one can use it in a processing sketch, the .zip comes with a couple of examples (SimpleExample is the best one to start with if you’re trying to get your bearings [pick the single precision version if you prefer working with PVectors()]). It includes a much more basic interface for interaction. But if the example is a bit confusing, the basic idea is as follows.

Let me know if anything doesn’t make sense. I realize the constraint system is a bit shy of self-explanatory. It’s pretty easy to understand once it’s explained though, so I’ll post a guide on that soon. In the meantime, you might try reading the documentation on Kusudamas in the reference folder.

Oh! Actually I have just the project for that already. A scheme for LATEX style text justification in browser without using javascipt. 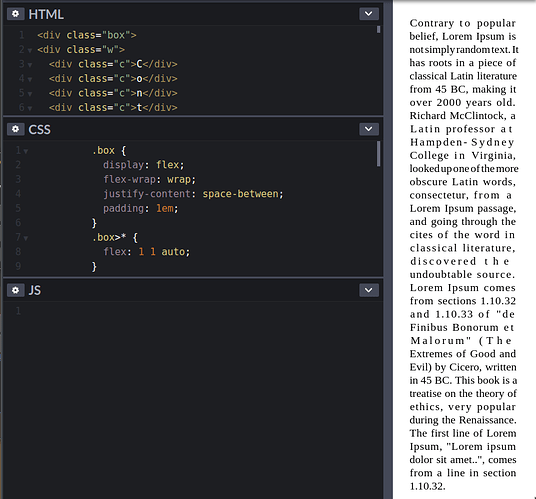