Beyond The Processing IDE

Following a recent post by Jeremy Laviole on the Reality Tech Forum, I was intrigued to see if I could use the latest apache-netbeans to run processing sketches adding processing jars as maven dependencies. Here’s the results:-
A java2d sketch (only requires processing core) 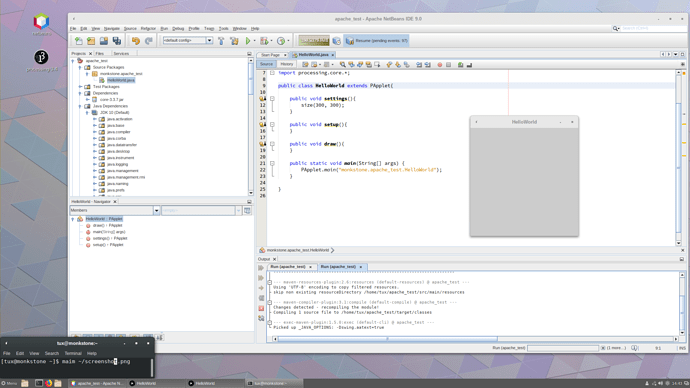 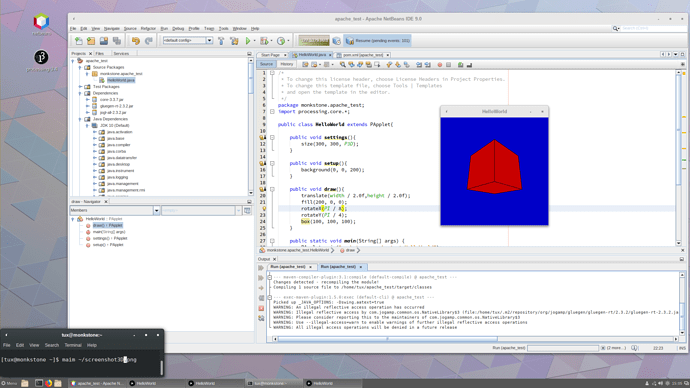 NB: The warnings in the output are to be expected.

Nice! But then I’m biased because I’m an Apache NetBeans committer.

You should give PraxisLIVE a whirl too (I say with even more bias). It’s built on top of NetBeans, which is how I got involved with the community in the first place.

PraxisLIVE looks really great, but I’ve got enough on my plate with JRubyArt and PiCrate which up to now I’ve been developing on netbeans-8 (I never got on with Eclipse) and atom for the ruby stuff. There was at one-time a JRuby plugin for netbeans (but it was too slow). So far no problems with jdk10, and I never had any problems with openjdk.

Yes, I use (and ship) OpenJDK on all 3 platforms. But not tried Java 10 yet - NetBeans 8.2 doesn’t run on anything above Java 8. Time to start updating everything!

NetBeans is getting language server protocol, which might be good for both Processing and Ruby development in future.

You tried Truffle Ruby yet out of interest?

I’ve been following truffle ruby with some interest, but it somehow seems less interesting at the moment, but in the future who knows, it might be able to integrate with OpenFrameworks? At the moment JRuby does a great job of integrating with java libraries and greatly simplifying java callbacks by seamlessly implementing interfaces eg Joshua Davis hype library.

I used Processing in a real IDE (IntelliJ IDEA, pretty smart and fast) for my previous project, exCircuit. Using a real IDE was actually how I got involved with more advanced Java, like better OOP, lambdas, and so much more… but then, Groovy came along and I didn’t bother to develop the old project anymore

Thanks to switching to an IDE one can learn many things, including JavaFX, advanced file I/O, or even embedding JavaScript into programs.