I used to run processing on a laptop with a 1440x900 display. I now have a new laptop with a 2560x1600 display. I used a timemachine backup to initialise the new laptop. In the processing preferences the only option is a display with the old resolution. When I run fullscreen() and print the width and height, I receive 1440x900. The sketches are being linearly scaled up and not utilising the pixel density of the new display.

How do I get the correct hardware resolution as a display option in my preferences? 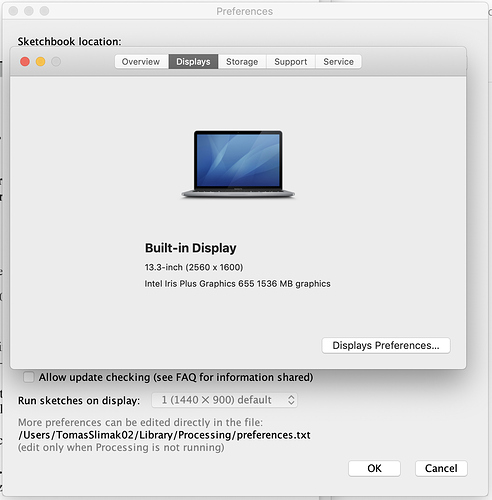 Retina display is a brand name used by Apple for its series of IPS LCD, and OLED displays that have a higher pixel density than traditional Apple displays. Apple has applied to register the term "Retina" as a trademark in regard to computers and mobile devices with the United States Patent and Trademark Office, Canadian Intellectual Property Office, and in Jamaica. On November 27, 2012 the US Patent and Trademark office approved Apple's application and "Retina" is now a registered tradem When an ... Since the 1980s, the Microsoft Windows operating system has set the default display "DPI" to 96 PPI, while Apple/Macintosh computers have used a default of 72 PPI. These default specifications arose out of the problems rendering standard fonts in the early display systems of the 1980s, including the IBM-based CGA, EGA, VGA and 8514 displays as well as the Macintosh displays featured in the 128K computer and its successors. The choice of 72 PPI by Macintosh for their displays arose from existi A ...