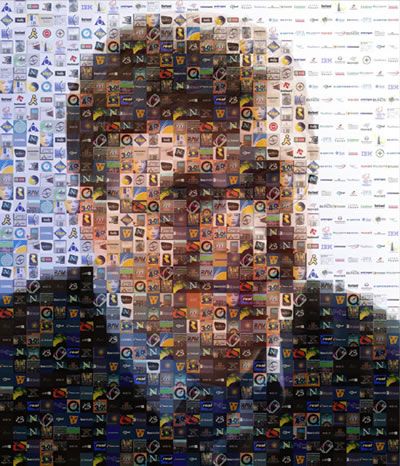 Let’s make a video:
I first wanted to try how this would look on an sequence of images.

I was pretty excited to see the first result, but unfortunately it turned out to look like a puree of wrong pixels rather than an interesting and pleasing mosaic look that I was looking for… But let’s not loose hope yet!

(I regrettably can’t show you the result since I deleted it (#idiot) and my .pde won’t run anymore since my access token at pixabay is expired… But trust me, you didn’t miss anything!)

An infinite zoom ?
Alright so what could be the next variation of our little mosaic programm since videos wouldn’t do it.

Well I have an image based on images, why not create something close to an infinite zoom ?
If we scale up one of the cells to fullscreen and so on, we could maybe get something interesting.

And so it was!

But we need a story!
Since I am also into filmmaking, I wanted a bit more than just an so called “effect”. Maybe we could use it to narrate something or even to retell something.

So I needed a story, and a story that people would know.

A Space Odyssey:
My professor at uni came up with the idea of Kubrick’s classic “2001: A Space Odyssey” and I decided to give it a shot with an infinite dezoom!

It still got some issues like the moire that comes from the downscaling algorithm in Processing.

The next step would be to check if a picked image from the database was already picked to get more variance in the final mosaics.

I hope your guys enjoyed it and I’d be glad to get some feedback!

Credits
I really would like to thank my good friend Ole who really made this possible since he is the brain behind all the math here.

Like most people I have watched many movies on the Internet but that was just the most amazing experience.

Congratulations on a truly remarkable piece of art.

I wonder if you could get enough “pixels” using only the still frame of the movie. Inception style =)

Absolutely incredible! My favorite movie of all time and you encapsulate the experience. I particularly liked the reversals at approx. 6 minutes and 7 minutes, because that’s what would happen in a wormhole!

I love everything about this project–thank you for sharing

One of the coolest Processing projects I’ve seen! Thanks for sharing.

great you shared and told the process of getting to the result. Inspires and gives confidence processing is a great tool to even create polished material above prototyping.

ncie stuff, congrats!
i’ve been trying to retrieve img search on pixabay too.
but I even can’t manage to get some img, I get this failure when I try to use loadimage with any pixabay link
java.io.IOException: Server returned HTTP response code: 403 for URL: https://cdn.pixabay.com/photo/2015/04/19/08/32/rose-729509_150.jpg

I can map all the hits in JSON objects and print them properly like “previewURL” and similars…
but it’s up to load images… ti fails. anybody tried something similar?