But when i will be using multiple serial ports(lets say 12) there would be delay between the time at which data is written to first serial and the 12th one.

I wanted to know
1)how to measure this delay.
2)how to send data simultaneously to all serial ports.

If anyone needs to the see the code i can post it.

Could you instead loop over the pixels[] array and send LED 1 to each controlled , then LED 2 to each, et cetera? Not familiar with the STM32.

I wanted a way so that we can send data to multiple controllers simultaneously.

Could you instead loop over the pixels[] array and send LED 1 to each controlled , then LED 2 to each, et cetera?

If you are doing this:

…could you do this?

firstly sorry for the late reply

i still don’t understand what you are saying.
is C the serial port and p the led data.

this is my current code:

the code has all the setup and draw loop not shown here.

this is one leddata array.
i have multiple arrays and multiple ports and i want to write data to each port simultaneously,
because if i do this

there would be a delay between controller one and controller two receiving data.
i don’t want that delay to be there.

this is my current code:

So, if you have a setup something like this:

Maybe people with more serial experience will have additional feedback on whether that approach is worth trying.

ok got what you were trying to say.
but the problem sending data in chunk causes a additional delay in the entire transmission process.

Thank you so much.

A core issue is, you can either send that much information with your hardware in real time or your can’t. If you can’t, there will be delay – you just have to decide where the delay will happen. You can synchronize on scan lines, or on chunks, or on whole frames – so synchronizing on scan lines or chunks will drop your frame drawing time, but the frames will be in sync. You can’t send a million cars between two cities, and then a million trucks, and have them all arrive at the same time because: roads. However, you can send 100 of each in repeated turns and the arrivals of both will remain more or less constant.

I would love to see people with more serial experience weigh in on this – particularly re:multiple devices and bandwidth. But if it is bandwidth, I think there is no magic bullet.

understood.
lets see what others have to say

To measure the time, you could grab millis() before then after sending each frame.
Perhaps have the STM32 reply when complete.

I am using USB CDC for communication.

The STM32 micro-controllers have these inbuild.

so when i connect the device using usb micro to the computer it shows up as COM port (because of the drivers)but is actually a USB 2.0 device capable of 12Mbits/s( i guess) communication speed.
I tested the time gap it was around 30ms, from STM32 initiating the request to receving the entire array on the controller.

I suspect you would see some slowing by spreading the cpu over multiple channels but the group would still finish earlier than in sequence.

I am curious to see your code if you would not mind showing it.

here is the code

Please tell how to do multi threading

I imagine you would want some kind of producer/consumer setup.
Producer: prepares a frame, adds it to a queue
Consumer: waits for request on USB, pulls from the queue, writes frame to USB

Need to have a pair to handle each of the STM32’s.
Shared resources may be troublesome… though reading from memory should be less of problem.
Maybe you could get away with a single producer for the lot.

Are you generating the data from individual frames of video or would one STM32 control a portion of the same video?

Not sure I could walk you through it. Certainly not at this hour.

Maybe a solution is to send all your data like you are doing but tell your STM32 to wait for a signal to actually use that data.

So then you can send a “go” to all your devices one after another, but since it will be very little information, it would be fast enough to appear in sync.

Hmm… I may have misunderstood the primary issue.

Do you think you will have trouble getting all data down the line in time or more concerned with getting the displays to update at the same time?

I realize one of those things can lead to the other.
Assuming the data gets there fast enough you could synchronize the STM32s via a circuit.

Maybe a solution is to send all your data like you are doing but tell your STM32 to wait for a signal to actually use that data.

Assuming the data gets there fast enough you could synchronize the STM32s via a circuit.

Each controller knows when they have received the entire data.
but is there a way to know which one will receive the entire data last.
if there is then i can make the that one create a signal for all other controllers to start displaying the data.

Do you think you will have trouble getting all data down the line in time or more concerned with getting the displays to update at the same time?

I am more concerned about the frame rate.
at 30ms per controller I am getting a frame rate of 30fps theoretical .
i will having almost 20 controllers which reduces the frame rate.
so I wanted a way so that each one can receive the data at the same time.

If you have a counter for the data then send all the data except one to each controller.

When it is done, send the last data to each controller. It should be fast enough so they all receive that last data almost at the same time and thus make it look like they are in sync

@jb4x 's suggestion would not add hardware and get the job done.

An external circuit might simplify your code, so there is a tradeoff.

if there is then i can make the that one create a signal for all other controllers to start displaying the data.

You could have the controllers watch a common signal and connect them as an AND logic circuit: 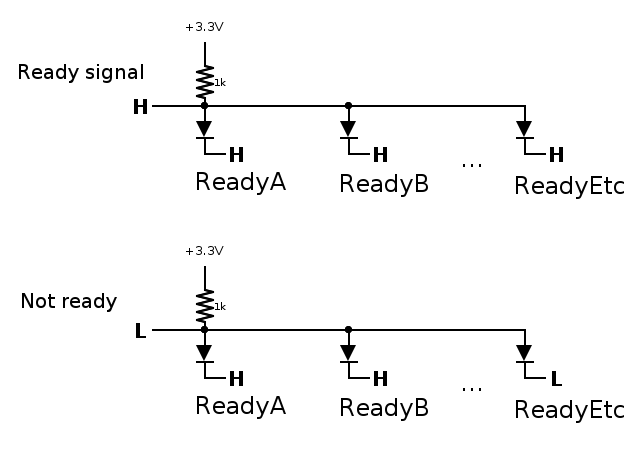 Ok
Thank you so much for helping me