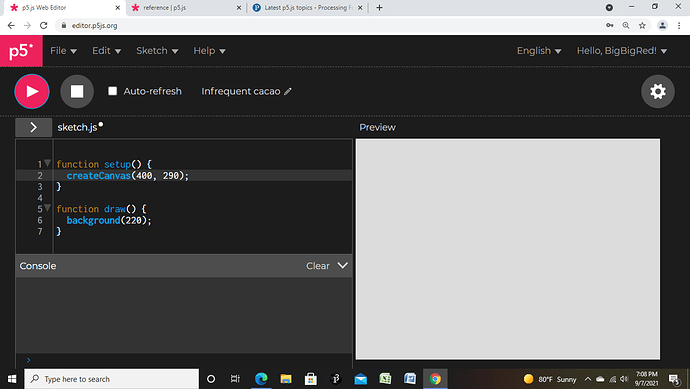 I would like to get back a 650 Wide by 500 High Preview Window.
If anyone has any recommendations, then I would love to hear them.

You just mean the Preview panel in the editor right? Print Preview is what you would get using your browsers native print functionality and is very different.

This is most likely controlled by some responsive CSS (that is CSS with different settings for different screen/window sizes). One thing you should do is make sure you haven’t changed your browser’s zoom setting (Command+0 or Control+0 usually sets the zoom to the default in most browsers). If that doesn’t work there are browser extensions that allow you to tweak the CSS of webpages, which could allow you to adjust the size.

Yes - I meant the Preview window in the p5js Editor.( I did not intend anything like printer preview.)

Paul, thanks for your help. I will try your recommendation right now.