I first developed a processing program 3 years ago.I believe that Processing needs an update(variable and instructions search list , a better debug system …).What do you think?

I would disagree. If you would like more functionality things already exist to allow for this to exists for example a more sophisticated debugger is present within the Eclipse IDE . So you could just take the Processing core and using there. I think the Processing IDE should stay as simple as it is to be good for entry level programmers. And there’s also no point developing technologies which are already out there.

What do you mean by this? Do you mean something different than “Show Usage” and “Find in Reference”, which are already built-in? 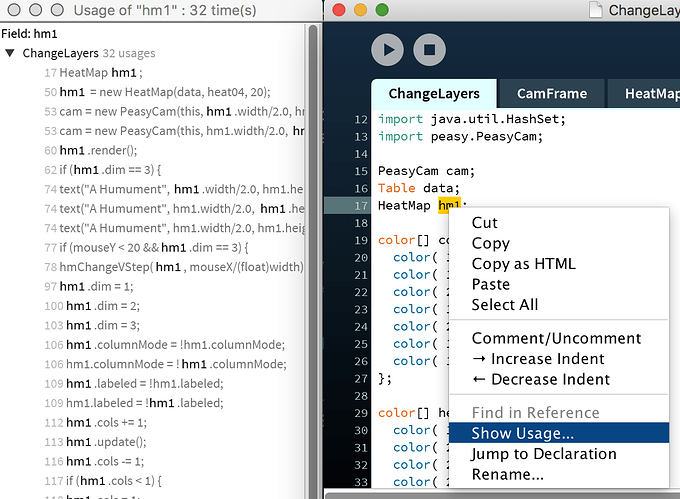 I‘d vote for a Advanced Menu for advanced Users for e.g. refactoring variable names, function names and so forth

compare it with visual studio.

Visual Studio Code is a general-purpose IDE with thousands of menus (and plugins). Could you say something more about which specific feature(s) from Visual Studio you want?

Or are you just saying that PDE should be like Visual Studio? Because that won’t happen – the devs have been saying for years that if you want those advanced programming features (code folding, split screen, minimap, git integration, etc.) then you will need to program Processing in a full IDE like Eclipse, Atom, or VS Code in order to get those features. PDE is intentionally simple for beginners (and for maintenance).

No.To create something as advanced as Visual Studio it would take years.I suggest Processing should have a better variable search tool , code resizing ,some new functions …

The only thing I ever wanted for the PDE is full compatibility to the latest Java syntax!

The debug system certainly needs to work better. It crashes more often than I actually use it

(no offense to you guys writing and supporting the PDE. I’ll provide examples on demand if needed)

Aside of that, I’d expect just one feature of the Processing IDE: support of the adjustable TAB character in sketches… I miss it so much!

But in general I think the PDE should be as it is: simple, welcoming to beginners, easy to get started yet powerful as long as you dig in.