Hello!
My name is Trilobyte, and right now, I am at a loss for ideas. I’ve got some projects kicking around, but a lot of the time, I like starting some long projects that I can come back to every now and then. I also have a feeling that some other people might want some cool ideas that they can work on on their own time. So here’s the call: does anyone have any ideas or challenges for sketches (with any degree of difficulty) that they want to put out in the open? (Obligatory please don’t suggest HW or other graded/school projects)
Thanks, and have fun!

Maybe you could make a reversed platformer. This means that that gravity is reversed and you go upwards instead of downwards. You could add some obstacles such as moving platforms, blades or lasers.

Hope this is a fun suggestion!

Unzip a zip file using P3. Then re-create the analogous version in p5.js. Or even clever, check if readBytes() works in Processing.js so you can execute sketches in java mode and also in the browser after transpilation via p.js library. This means you will have to write the code once and it would work in both java and js languages.

A sketch that lets people play with (or generate, or edit, et cetera) point light walkers

Create a Processing library that allows user selection operations with the mouse such as the rectangular marque selection, polygonal lasso selection, or freehand lasso selection. Users can use the mouse to build or draw a selection area on the screen with visual feedback about what they have selected

My idea is small game with multiple levels

It’s a 3D game where you look inside a 3D space (like a room or a box but without walls).

You aim with a mouse a ball with a 3D Gun turret, https://en.wikipedia.org/wiki/Gun_turret

Your goal is to throw the ball into a small basket (target).

Now since there is a glass wall before the basket, you can’t shoot directly. Instead there are small reflective pads in the area. They push the ball forward. So you aim, hit the pad and the ball hits the basket. Next level. More and more obstacles (glass wall or other walls appear), the basket gets more far away and you have to use multiple pads (levels getting harder).

There is no gravity and no damping, so in theory the ball goes on forever (when not hitting the basket). Or maybe it’s better with gravity, I don’t know.

Apart from the game you could program a level editor to place basket and multiple pads.

Also, like in Pinball (https://en.wikipedia.org/wiki/Pinball) there could be additional things, like a jump pad, that accelerates the ball or a looping that moves the ball through a passage.Or a tunnel behind a wall. After firing the ball, the camera could follow it.

There could be a SloMo after each level. 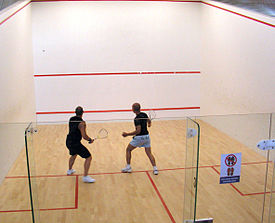 Squash is a ball sport played by two (singles) or four players (doubles squash) in a four-walled court with a small, hollow rubber ball. The players must alternate in striking the ball with their racquet and hit the ball onto the playable surfaces of the four walls of the court. The game was formerly called squash rackets, a reference to the "squashable" soft ball used in the game (compared with the harder ball used in its sister game rackets). The governing body of Squash, the World Squash Fed...

I was watching the waves come into shore on the 5 th floor of a Daytona Beach condo.

Then I thought , a processing sketch that could create these waves coming in to shore in a changing but repetitive cycle would look great on my big screen on the wall.