I’m trying to learn how to use the Processing library with Eclipse to solve a puzzle (Rubik’s Cube) my son challenged me with. The main problem seems to be with using P3D in Eclipse. Here is the test code:

With the above code, the output window is blank (nothing seems to be rendered), as shown in the left half of the below image. Also, the X to close the window and kill the process doesn’t work – I have to use the Eclipse stop button to halt the process. It doesn’t seem to draw anything, even after waiting several minutes, and the system appears idle. 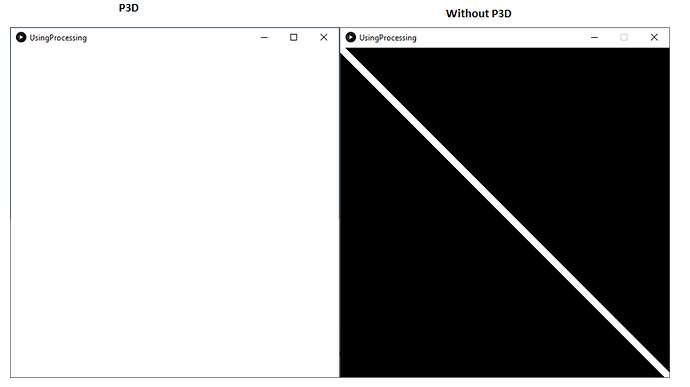 If I remove the P3D option and instead use the two-argument size() method, the image on the right is output. This is the correct test output.

I have tried with Processing 3.5.4 and 4.0b2. I have tried uninstalling the JDK, JRE, and Eclipse, and reinstalling to no avail, despite building new Eclipse projects.

Any ideas what I might be doing wrong, or where else to look?

You are probably missing the OpenGL jars, which need to be added to the classpath, the processing ide does this for you.

Just tried your code on my Eclipse setup and it works so I agree it is probably because you have not linked in the OpenGL library jars.
This shows my build path - 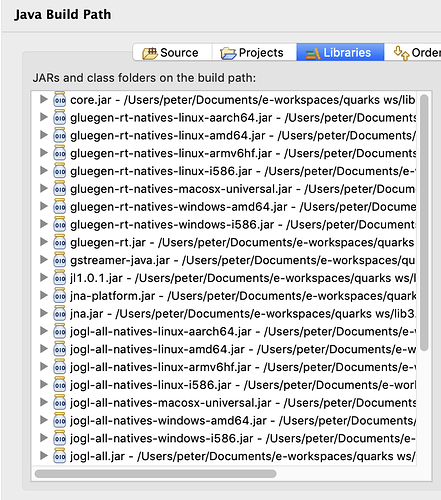 Here is a picture of my Eclipse with build libraries included: 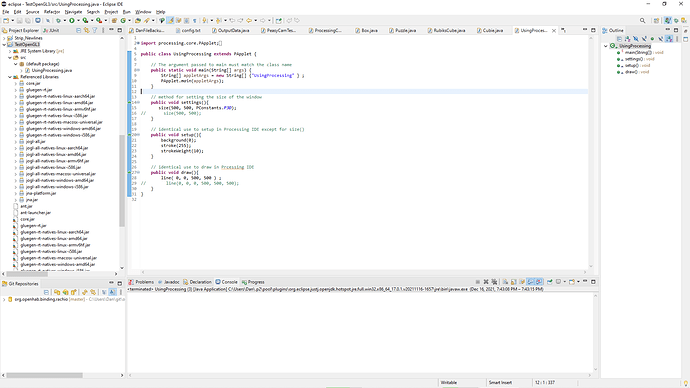 I am missing a few of the libraries you included, namely jl1.0.1.jar and gstreamer-java.jar. Are those also required?

You shouldn’t need those two jars, the first is part of the minim library and the second is part of Processing’s video library.

I am missing a few of the libraries you included

I think you have something weirder going on here. I would have thought you wouldn’t get as far as seeing a window if jars were missing, or at least see an obvious error message.

Maybe try porting the specs test example (from Examples / Demos / Tests) and compare the output in Processing and Eclipse.

the second is part of Processing’s video library.

Does adding @Override before settings, setup and draw make any difference?
Does a P3D program work in the Processing IDE?
What OS, GPU and drivers?

Thanks for the ideas. I ran the Specs test, and got some interesting results. First, the Specs instance ran and created a blank window, as before. No indications of versions of different PGraphicsOpenGL variables as expected. This caused me to think that something is wrong with how the library draws. So I switched the println()'s as above to System.out.println(), and still nothing (in console or frame).

I moved the System.out.println()'s to the settings() method, and it produced all nulls:

So I set a breakpoint on the draw( ) method and discovered the method is never reached when using the P3D, but it is called repeatedly for 2D graphics (two arguments to size() method).

All of this is after again uninstalling Eclipse and reinstalling, but this time using a clean .settings folder (on my desktop).

Thanks for Override suggestion – no changes observed when explicitly overriding the PApplet methods.

Yes, this does work with the PDE.

This is on Windows 10 (current patch level), on an Alienware laptop with nVidia GeForce GTX 1660 Ti display adapter.

Maybe the Java version? I remember having issues unless I used the Adopt JDK version, and if I remember right using the most recent version didn’t work when I tried. It works fine for me with P3D in IntelliJ Idea with Java 14.

There used to be a linker issue with certain versions of JDK on linux, but that seems to be gone now Choice of OpenJDK is Critical - #4 by monkstone, maybe it persists with Windows? Generally I don’t rely on an ide to pull in dependencies, I prefer to set up a maven project, but then I never got on with Eclipse preferring Netbeans, however any half decent ide should be able to cope with a maven project. That @quark got your project to run suggests something odd about your setup.

Thanks for Override suggestion – no changes observed when explicitly overriding the PApplet methods.

Yes, annotations are metadata - they don’t change behaviour of the code. In particular, this one just tells the compiler to flag an error if the method isn’t an override to catch problems.

This is on Windows 10 (current patch level), on an Alienware laptop with nVidia GeForce GTX 1660 Ti display adapter.

Is this with Optimus? I was curious at the results for the spec test in Processing and Eclipse to see if you had different GPUs / drivers in play. If so, is there a way you can test with a forced GPU choice?

Always a possibility! Can you compile in Eclipse but run against the JDK inside the Processing installation? Eclipse should have an option for running projects against a different JDK to the one you’re running the IDE on, somewhere … (not my choice of IDE)

Generally I don’t rely on an ide to pull in dependencies, I prefer to set up a maven project, but then I never got on with Eclipse preferring Netbeans, however any half decent ide should be able to cope with a maven project.

As a NetBeans release manager, and a big fan of Maven, I cannot help but agree!