I’ve created an LED light sculpture out of plastic contact lens trays and uses Processing. I call the piece Poly-Mer.
Video of Poly-Mer 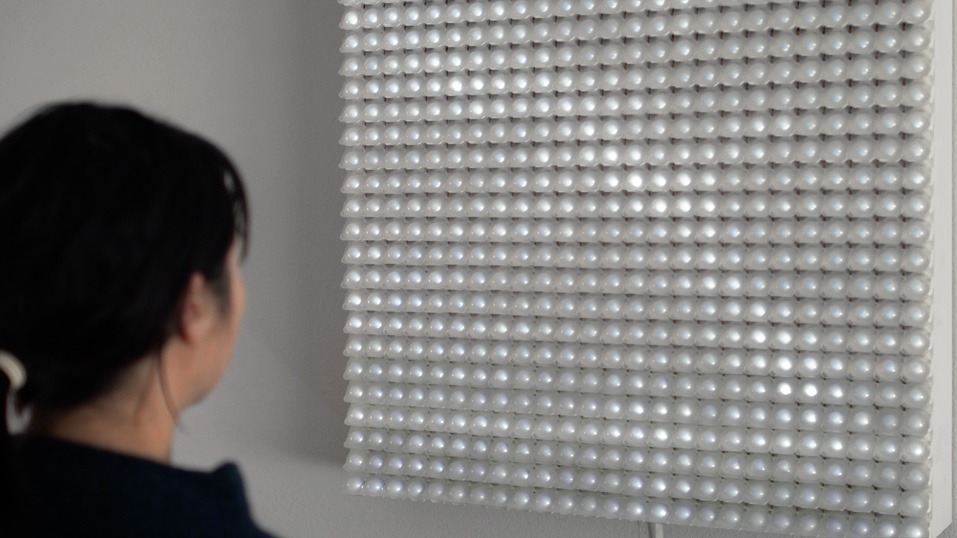 Disposable contact lenses are typically packaged in single-use plastic containers. Poly-Mer is a light sculpture which repurposes these plastic trays into a shingled translucent surface, which is then used to diffuse the glowing light of a low-resolution matrix of LEDs.

The plastic trays are held in arrangement by a series of interlocking custom 3D-printed holders. The material surface formed by these trays is animated by a video of ocean waves, bringing plastic and water together as a reminder of the perils of plastic ocean pollution.

Some notes about the Processing sketch of Poly-Mer:

Are all these lenses from personal use or did you announce publicly that you would be collecting lenses? It would also be interesting if you had a basket of left over empty plastic trays on display as well. I wonder if making it at an even larger scale, and with different kind of packaging trays, would communicate further the enormity of this consumption.

What concept do you use to generate the light patterns?

Thanks @WakeMeAtThree! Those contact lens trays come from a blend of sources; some were from my own use of contact lenses, some were from friends, and some were from a generous optometry clinic that donated some trays. Some trays were discarded due to trial-and-error when I was experimenting with various sandblasting methods (to give them a frosted translucent surface, to better diffuse the LEDs), so I needed multiple sources of trays.

re: making this at a larger scale or with different kinds of single-use plastic containers, I agree, I’ve been thinking along the same lines for a possible next project. Would be great if I could get a grant to do this…!

Thanks @kfrajer. The animation of the LEDs is a video of the ocean ripples and waves (which I shot at Channel Islands, in Southern California). The concept is to show the ocean on a surface made of single-use plastic, evoking the urgent issue of plastic ocean pollution.

The video is an .mov file that the Processing sketch is playing.