I cobbled this together from something @Chrisir once wrote. I only have one small question. What, if anything, does img=null; do? It is at the end of the setup() block.

if you use a picture of notable size
and try that code with or without that line
you could check on the by your running code use memory.
i do see here ( win 10 ) some small difference. 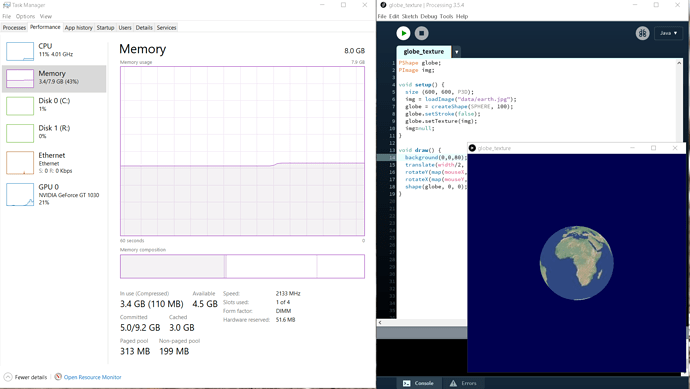 PImage is an object and by setting it null I make sure it has an initial value. But no image in it

But maybe it’s null automatically (its default) - I don’t know.

But sometimes I check if(img!=null) to control if the loading of the image was successful

For null see reference I guess

Thanks @Chrisir
So, should img=null; come earlier in the block, before the loadImage()? Or doesn’t it matter?

Since I don’t need the image anymore after copying it to globe, I deleted it afterwards to make clear it’s not used anymore. And it saves a bit of memory

It could also be a local variable in setup

It could also be a local variable in setup().

Or even better, just pass the loaded PImage as an argument for the PShape:

And it saves a bit of memory.

That depends whether the PShape object keeps the passed PImage reference to itself.

Now I understand! @Chrisir Thank you.

@GoToLoop
Is the idea to get rid of the img completely?
Like this:

Is the idea to get rid of the img completely?

Yup! If some value is gonna be used in loco only, we don’t need to store it in some variable.