OpenProcessing + iOS Safari: How can I stop the console from popping up when no error has occurred 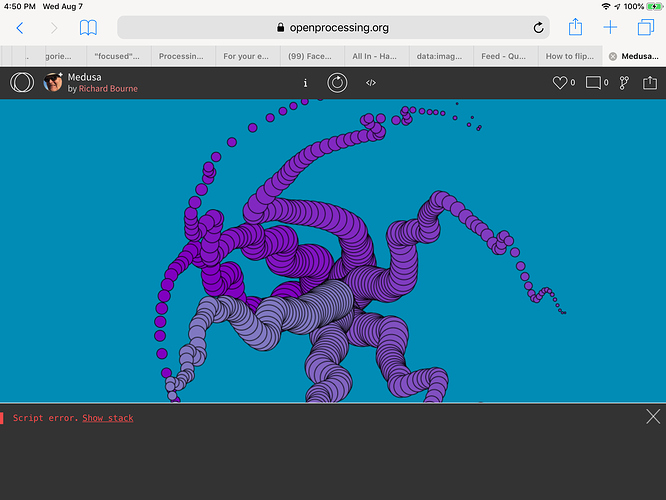 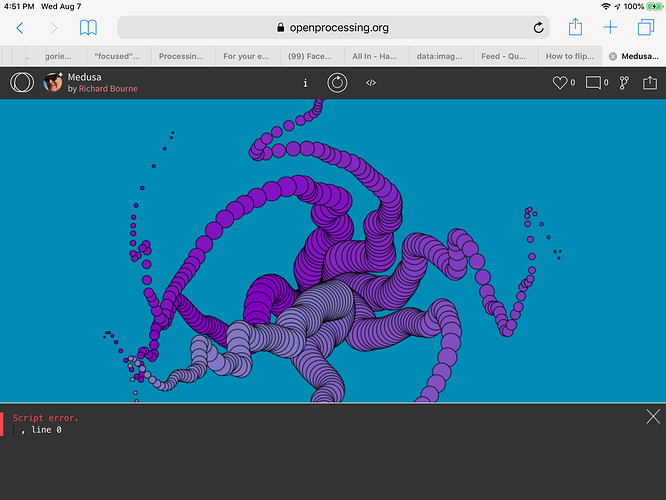 D4576AFA-E48B-4FE9-BDDD-CF15280F67F8.jpg2048×1536 419 KB
I spend a lot of time with my iPad running OpenProcessing on Safari and have a large collection of sketches written both in Processing and p5js. The Processing sketches have an annoying bug, at least in iOS. Every time the screen is touched, the console window pops up, covering a portion of the screen. It gets in the way of mouse movement and blocks the screen view. It reports an error “Script error - show stack”. When the hotlink is tapped, it then displays “Script error , line 0” giving me no clue as to what the error might be (see screen shots attached). If I close the console, at the next screen touch it opens again. I love some of the subtle effects that Processing allows me, but this one bug pushes me strongly toward using p5js, which does not exhibit this behavior. I should stress that mouse and touch detection work fine in both Processing and p5js.
1 Like
Quirks running Processing on Safari iOS
kll August 8, 2019, 2:07am #2

when i call your sketch
https://www.openprocessing.org/sketch/743051 here
/ win 10 / firefox browser /
and even click canvas,
i not get any error.
so also not see the console or its link button " )- " down right

did you play with view options?

Thanks for your feedback. It is becoming apparent that the iOS operating system and Safari respond to Processing - or the OpenProcessing site - in a different way than browsers running on Windows. For example, I don’t see scroll bars.

I will try the view options and see what they do.

I am quite into OpenProcessing at this time. I use both Processing and p5.js to create sketches, but I have a few more issues to deal with when using Processing. The absolute worst is that every screen touch makes the console pop up! As you can imagine, it gets old really fast having to close it dozens of times when running a sketch. Has anyone else experienced or better, found a solution for this issue? I hope there is a way in code to suppress this action or reverse it after it happens. Thanks.

I know that there is a Processing app for iPad. I haven’t spent much time with it, but at least I will check to see if it also has this issue.