How can I download a higher resolution of this?

I’m a huge fan of the art/aesthetic that this supposed processing script runs:

(From the Ex Machina film- great movie you should watch).

Here is an example of the art: 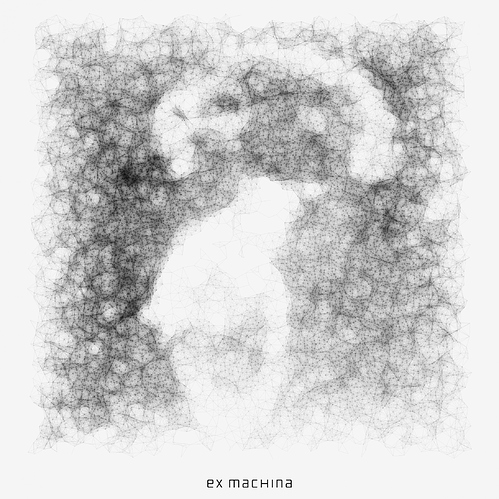 The issue I’m having is that they only offer a download of 2000x2000, but the website appears to have infinite resolution as I can expand it and zoom in. Is there anyway (via source code?) to acquire a higher resolution? Thanks!

To first answer your specific question, yes there is a way, many in fact. As you have related that the web page is willing to present zoomed images, you could capture several of these and laminate them together with an image processing package. The freeware gimp package is quite powerful, and a how-to for lamination is available at [https://www.techwalla.com/articles/how-to-merge-pictures-in-gimp].
The question of resolution will determine if you would need more than a few manual driven screen captures or not. Best practice is to save your screen captures in one of the lossless graphics formats such as .png (avoid .jpg ). I like MWSnap for my capture software https://mwsnap.en.softonic.com/ as it offers both png and bmp formats with a zoom-in window allowing capture on a pixel selectable level. How many sub-images you need will depend on the ratio of your computer web page display to your desired output. If you are headed toward a UDF tv as our output, connecting the hdtv output from your computer to the TV and putting your web browser on that high-pixel count display would allow you to get away with only 4 screen grabs.
If you are going for truly large resolution images (600 dpi commercial printers with multi-foot room sized output), you will likely need to get into some image processing programming for two separate tasks 1)capture 2)assembly. I use the java robot class to express control over the mouse to manipulate other programs like web pages. This could set you up for a substantial number of page zoom/redraw/capture actions. The robot class also has screenCapture stuff. The assembly can be approached from a programming view as ingestion of the several image files as well documented, formatted data, and assemble the data from the several files into one large dataset with the image file format. Getting into the guts of an image file format is more than a beginning programmer task, but that’s how bootstrapping expands our areas of functionality.

The problem here is that this thing doesn’t give a static image - when you zoom in, parts of it move around - and also extrapolate when farther away from the screen, i.e. somewhat 3D.
From that it’s obvious that it’s not just an image, but rather a lot of lines that compose the drawing - which the script just captures an image of at that resolution and spits out in a download box.
As a result, of that, you can’t just screenshot it by parts and stitch them, as the stitching will have obvious seams.

On that note, I looked around the javascript code a bit, and I couldn’t find the 2000 figure anywhere except in large numbers that are weights for what I guess to be face detection.
Also, your image is 2191x2191 in size, and a random image I gave it ended up in a 947x947 render. So, I guess, there is some randomness or other math involved.

I don’t know if I can help any more past that, but here are my 2 cents.

Thank you so much guys for the response! I may have to go the route if just manually screenshotting segments (after I figure out how to freeze th moving particles…)