Gravity in a solar system

I’m trying to simulate a solar system type thing where on planet orbits around a sun. The planet has an initial velocity of x+2. However, it always seems to follow this long elliptical orbit.

I’m trying to get it so that after a while, it’s orbit soon smooths out into more of a round circle orbit, but I can’t figure out how.

So right now, it follows a highly elliptical orbit, and orbits like that forever, but I want it to eventually go to a circle orbit. Any ideas?

I suspect that orbits of astronomical objects become more circular over time due to gravitational interactions with objects other than the one they’re orbiting. So why not try to put one more in the system to see what happens?

if you spawn the orbiting body at 300, 100 instead it will be more circular, and change the dir to 3, 0 instead

With a bit of math you can plug in some “exact” values for your PVector dir (velocity) to give you a circular orbit: A centripetal force (from Latin centrum, "center" and petere, "to seek") is a force that makes a body follow a curved path. Its direction is always orthogonal to the motion of the body and towards the fixed point of the instantaneous center of curvature of the path. Isaac Newton described it as "a force by which bodies are drawn or impelled, or in any way tend, towards a point as to a centre". In Newtonian mechanics, gravity provides the centripetal force causing astronomical orbits. One commo... 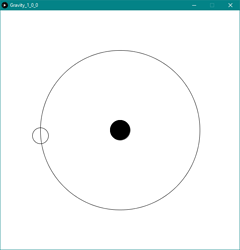 Give it some thought.

I won’t give you the answer… the best part of this for me was solving this from an understanding of the fundamentals.