Using a 2D Array in a Class Object - NullPointerException?

The following is a short sketch with a single new Class. In the class I’m trying to develop a 2D array in the Constructor and then use it in a method in the class. The method recognizes a variable in the constructor but does not recognize any of the elements in the 2D array? It works if you comment out the “println(aWallR[0][0]);” line at the end of the class, but if that line is included, it fails with a NullPointerException. Any suggestions will be appreciated!

these variables have already been declared … you only need to allocate them here.

Thank you for taking the time to respond - but I am unsure how to interpret your input.

In my other experiences with arrays (albeit somewhat limited) - I needed to set their scope/size with this type of statement prior to defining their values. Are you suggesting those two lines are unnecessary? If they are removed you get a NullPointerException in the class constructor when you try to define their values. They seem to be defined properly in the constructor but are not recognized in the class method?

you have already declared the two variables …

so now all you need to do is allocate them in the constructor.

as is you are declaring them twice, the compiler won’t allow that.

I do appreciate your taking the time to provide input and recommendations.

The problems seem to associated with the method recognizing the array that is defined in the constructor, but it does recognize the int “nCell”.

I have tried to “this.” these class variables and that doesn’t help. I want object in the class to have different values of the 2D array variables as defined when each constructor in invoked … if that makes sense to you.

Thanks again, I will keep trying!

Currently, you have declared the two arrays as global members, this is fine since you want to use them in your method.

Your issue is you are declaring them again in the constructor, this is not allowed. Just allocate them here.

tldr … remove the declarations in your constructor.

If I remove the declaration in the constructor, there is a NullPointerException as it attempts to define the values of the variables in the array. 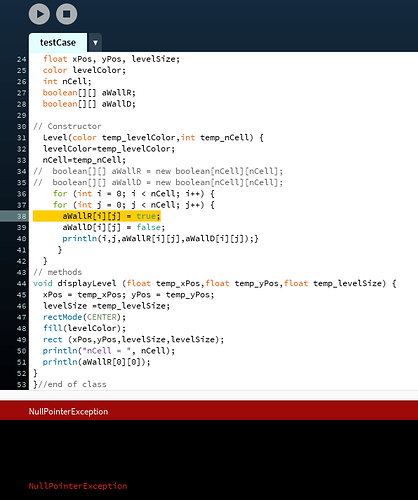 Sorry … I used the wrong verbiage.

You need to allocate them in the constructor using the new keyword. 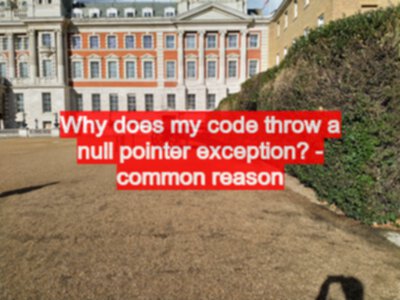 Why does my code throw a null pointer exception? - common reason

TLDR; check that you haven’t redeclared a field as a variable in a setup method FAQ - why does my code throw a null pointer exception - common reason #1 Redeclaration Using @BeforeClass or @Before can setup data for use in tests Any ‘variables’ we...

Thanks much for your efforts. I knew it was something “simple” but my inexperience with some of these constructs caused my problem. I thought I had tried every combination but obviously not.

This is a great forum and well worth the price of “admission”.