When rotate() is before translate(), why does "The shape now rotates around the upper-left corner of the canvas”?

It seems to me that the behavior should be the same regardless of whether rotate() comes first or not.

i think translate sets the origin of the rotation.

Let me suggest also reading the 2D Transformations tutorial. It is for Processing, but the translate / rotate model is exactly the same.

Check out the section on rotation. It deals with this aspect of order: changing the origin of rotation, then rotating 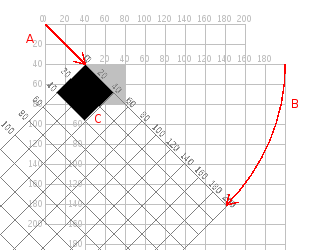 One thing I miss in the Processing APIs compared to eg. Java2D is a form of rotate() that also takes the centre point to rotate around. Basically the concatenation of translate, rotate, translate back.

Because 4 lines and using the matrix stack is better than one?!

I thought a rotate-around form of rotate had been proposed in the past as an addition to the API – but I’m not able to find it when searching issues https://github.com/processing/processing/issues?utf8=✓&q=is%3Aissue+rotate

In general, core devs are quite conservative about adding signatures due in part to maintenance headaches, but to me this does seem useful – in particular, conceptually useful for learners. The main downside from a project maintenance perspective might be that in addition to the reference, the major tutorials and examples don’t discuss it, so ideally they would also be updated.

just out of curiosity:

do you mean that

would be much faster than the usage of pushMatrix and popMatrix?

Because I have a menger sponger with 1000s of cubes…

@Chrisir – if you test your sponge with pushMatrix or with translate, which is faster? I’m curious. (Also, I wonder if it is the same for Java2D, P2D, P3D).

Pardon me, I mean test atomic calls. Clearly if you only push and pop once, then use local relative variables, that is faster. But 2000 translates is faster than 1000 pushes and 1000 pops – I think? The point being that the each form is “faster” depending on how you are using it in the larger code construct.

Hard to test, there’s a lot going on

there’s a lot going on

Of course. Be well, take care of yourself.

I thought it would clash with an existing P3D rotate() method but it seems not. Always thought it should be more like rotateAt() or rotateAround(). I have a few extra methods like that in PraxisLIVE (such as 7 parameter image()) but haven’t quite got around to this one yet.

Interestingly, there is a 4 parameter version of rotate() in Processing already though -

Interesting – Where did you find that in the source? Is it unimplemented in JAVA2D? I tried it with a default sketch, and it did nothing.

It’s in the PGraphics source code, although only implemented in PGraphicsOpenGL. I forgot this is in the p5js section.

@Chrisir the reason translate should be faster than the matrix stack is it only involves maths vs creating storage for the matrix values.

Thanks for sharing reference; this helps.