Trying to get a better understanding of array loops

Hi, I’m trying to get a better understanding of arrays at a basic level before I advance to using them with functions & classes, but I am struggling a little.

This only creates one circle, before giving the error Uncaught TypeError: undefined is not a function in Line 50 / Column 11

hi! I think this line is a very specific syntax in recent Javascript (ES6)

this means you unpack the array returned from circle and assign to i. For example, if circle were to return an array like [1, 2, 3], then i becomes 1

But I guess that’s not what you need here… (circle does return an object but not an array, and you rarely need this object) If you can share with us what you want to achieve with the code, perhaps we can give a better suggestion.

will keep adding elements to the array every frame. So after some time, it will blow up

What you can do with iteration is, for example 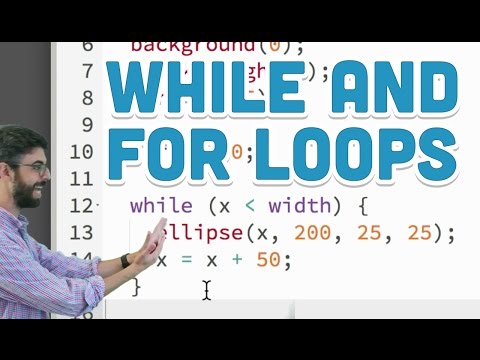 I’m just trying to build my intuition with array loops at a very basic level without additional functions, & classes.

For me, once I have a good understanding of array loops at a basic level, incorporating loops in functions, and classes of various complexity should be easier.

This is probably not the best way but what I’m trying to do is make a different coloured circle at each mouse click up to a maximum number. max = 10;

in terms of the shape, using ellipse(x,y,s,s) would give me the same result.

I assumed that I need an array to hold the number of ellipse objects, that will go up by one on each mouse click to a max of 10.

but because I’m not that good with arrays yet, I’m writing it out incorrectly, and I’m trying to find out why.

You have a good intuition of what loops are, but I feel you are trying to do something rather complex. I recommend you to start with Dan’s tutorial, in which he explains how to draw shapes in a loop. It’s always good to start with something simple as it’s more rewarding and fun

I recommend you to start with Dan’s tutorial, in which he explains how to draw shapes in a loop.

I have watched those videos and I’m past those. I understand working with functions, and objects, but when I introduce arrays things get messy and I think it’s because I don’t understand arrays top to bottom.

I feel you are trying to do something rather complex.

So to be clear, I’m not trying to make this code work.

I’m just trying to understand why it breaks down. I’m going to assume it would work smoothly if additional functions were created

Either way, I appreciate the response. I guess this is one of those things you improve your understanding of as you code.

Can you give me any tips for writing loops with arrays,

In Processing arrays are generally used to store objects we instantiate from a class.

And in draw() we use a for ( of ) loop to access those stored objects’ properties & methods.

The sketch below use a for ( of ) loop to invoke the method display() for each Ball object in the array balls[]:

It also calls back function createBall() every time we click the mouse inside the canvas and push() a new Ball instance into array balls[] until its length is 8.

Once the array is full each click now recycles a Ball instance from the head of the array back to its tail.

2 more sketch examples to check out:

Ball in the Chamber

@GoToLoop I have a few questions regarding the example if you don’t mind. I noticed you created the function for the array outside of draw, and you created a class.

In terms of my beginner workflow, I start with generic shapes, and I try to build on them and expand them into functions. I feel like this is causing me difficulties, because I don’t have the complex structure of functions and classes in place. should I just start with a class from the beginning?

, do you have to make a class/object? I assume it is easier to work with,

That’s the easiest approach. Having a class to represent both the properties (data) and all the actions (methods) we can do w/ those props. encapsulated inside the same structure makes things much easier & organized.

, but is it not possible with functions alone?

Well, you surely can! However, you’re gonna need multiple containers, like 1 array for each shape property; and have to track down the current index for those containers.

Should I just start with a class from the beginning?

If you know you’re gonna need multiple copies of a shape, starting creating a class for it from the beginning makes sense.

Could you expand on the logic as it looks a little advanced.

Indeed it’s written in advanced style. But let’s try to simplify it.

which is called the conditional operator btW:

The conditional (ternary) operator is the only JavaScript operator that takes three operands: a condition followed by a question mark (?), then an expression to execute if the condition is truthy followed by a colon (:), and finally the ...

That statement can be further transformed into an if () / else structure like this:

In createBall() you create a constant b, make it equal to MAX_BALLS & you shift the array or create a new ball.

As you can notice by now, MAX_BALLS isn’t the actual value being assigned to variable b.

Instead it’s either an already existing Ball object returned by the Array::shift() method:

The shift() method removes the first element from an array and returns that removed element. This method changes the length of the array.

Or a completely new Ball object:

The new operator lets developers create an instance of a user-defined object type or of one of the built-in object types that has a constructor function.

The length property of an object which is an instance of type Array sets or returns the number of elements in that array. The value is an unsigned, 32-bit integer that is always numerically greater than the highest index in the array.

Either way, variable b stores a Ball object, which is then initialized/reset via method Ball::setXY() and then Array::push() back to the balls[] array:

The push() method adds one or more elements to the end of an array and returns the new length of the array.

In short, balls[] never gets bigger than MAX_BALLS.

An oldest Ball object is continuously being removed from the beginning (head) of balls[] and re-inserted back to its end (tail).

I mean there are arrays and there are loops (for example while loop or for-loop).

There are also loops you can use to work with arrays. But array loops…? No…

Reference: see Reference / Processing.org for FOR (there are other loops)

reference page also has an array section for commands like append: Reference / Processing.org

Sorry. I’m figuring it out as I go. I meant loops which contain arrays.

Nothing to be sorry for! Nothing at all…