Recently I’ve been trying to implement Craig Reynolds steering behaviors into my program, and as I’ve come up to obstacle avoidance, I’ve found it difficult to replicate his example. (Video of what I’m trying to make)

I’ve looked over various websites and papers, but I’ve been a bit confused about how to calculate the avoidance force. The avoidance force is the force that the vehicle needs to take to avoid an obstacle (Represented as circles). 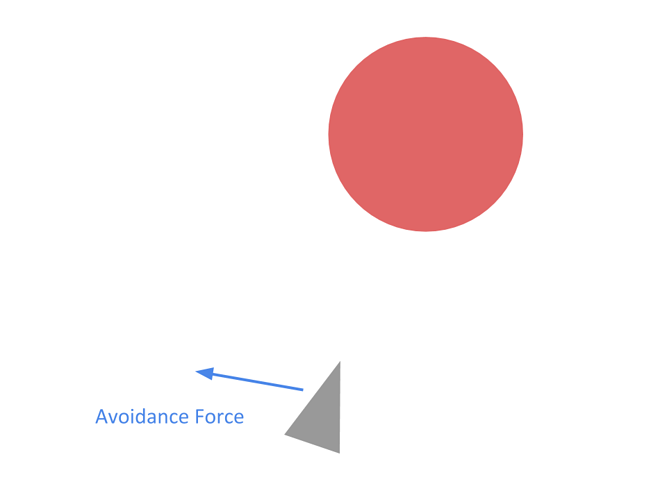 Lots of websites use an ahead vector (a vector projected to the vehicles future location) to calculate it, but it doesn’t seem very realistic. Any questions, advice or tips are welcome.

There is also a heading, which is a secondary axis that is defined from the center of your vehicle to the tip of it.

If the heading aligns with the main axis, you are in a collision course. You need to apply a force that is:

Notice at the end, the force intensity that need to be applied to the vehicle depends on:

This would be my approach. I have broken it down into steps and hopefully you can use this to create your algorithm. Sorry I couldn’t see your video. I have problems on this computer to access certain sites.

@Sarah The Coding Train’s playlist on steering behaviors may give you some assistance:-) - https://www.youtube.com/playlist?list=PLRqwX-V7Uu6YHt0dtyf4uiw8tKOxQLvlW

Thanks for your advice! I’ve gotten started on it now, and I’ve had a question about how to tell which direction the lateral force should be applied in. For example in this case: 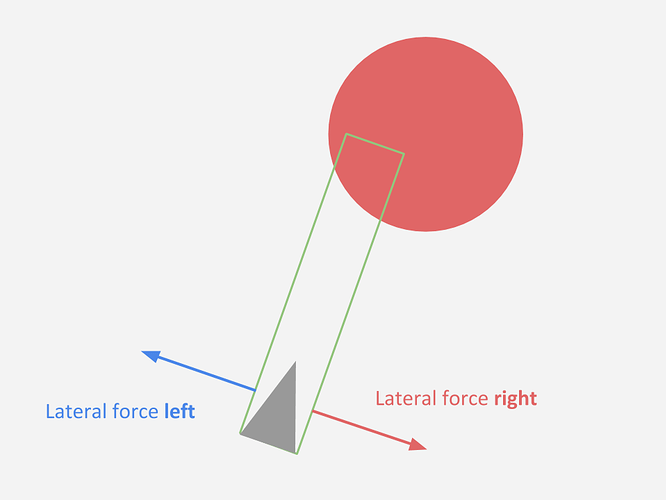 I would want to apply a lateral force to the left to avoid the object. I’ve tried to solve it but I couldn’t find a very efficent way of doing it. 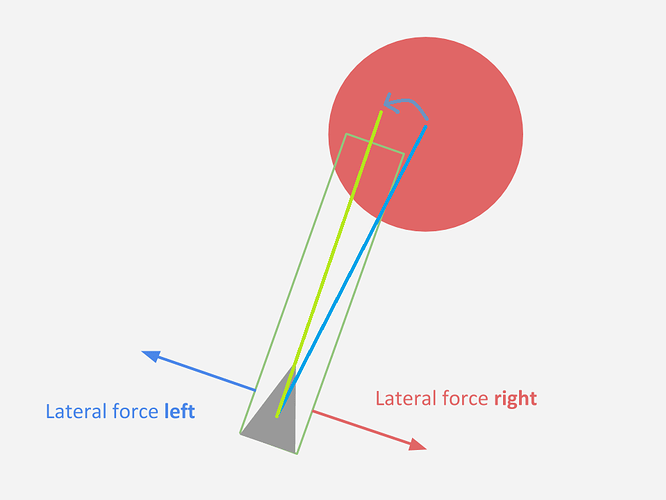 Knowing that direction you know in which direction applying your force.

Adding to @jb4x post, I think I would use the dot product to get the angle between the two axis. If you are using PVector, you could also use heading() for each axis which provides an angle and then subtract both angles. If you get a positive value, then the force is applied towards one side, negative then would be the opposite side.

In addition to .heading(), PVector has .dot() and .angleBetween(). If you have the centers of the two shapes and the tangent point then you could get the angleBetween of those two vectors to get the turning angle.

…but that tangent is constantly changing as the vehicle approaches, so then questions like how big / close / fast could come into play.

Is the goal to have different turning speeds for different situations, or are the number of degrees turned per frame fixed (i.e. keep turning away at a constant angular momentum until you are clear or crash)?

For a related past discussion about shadows, see: https://forum.processing.org/two/discussion/18975/simulating-shadow

Right now I’m just applying a lateral force, but ideally, I’d want to have the forces vary based on different factors (distance to the obstacle, distance from obstacles center).

Currently, I have a problem trying to be able to have two forces acting on the boid. (Such as seeking and avoiding).

For example, if the boid is seeking mouseX and mouseY, when it avoids it the lateral force would make it turn away, but when it is turned away the avoidance force would no long be applied, so the seeking force would turn it back into the obstacle, and so on. This seems to result in a jittery and unrealistic movement. 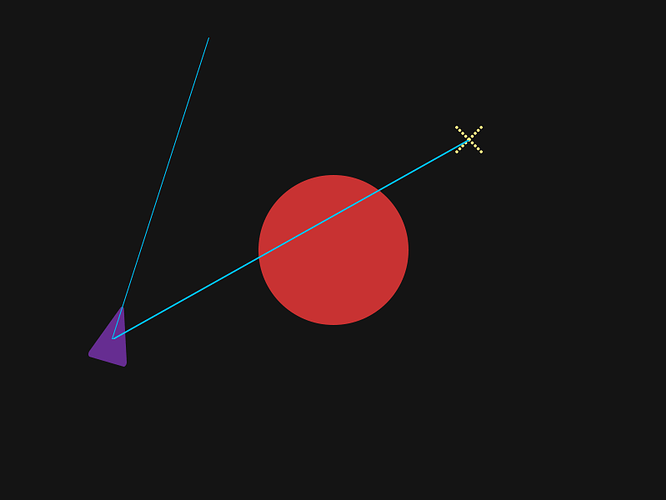 As you can see, we are in a scenario where, for exemple, the boid were going straight into the obstacle but you applied a lateral force to make it avoid it so now it is not in the path of the obstacle anymore.

Now you can see that if no obstacle force is applied anymore, the boid will start following the straight path and hit the obstacle again so you will apply a new lateral force and so on and so on resulting in your jittery behavior.

Based on that you can have 2 kinds of avoidance behavior:

I would also apply the previous rule only when close enough to an obstacle.

Thanks for your response!

I think the first option will be more reliable in long-term, as I eventually would like a bunch of boids to wander while avoiding objects.

I’ve also been experimenting with making two lines that point 45º in each direction, and if there is an object colliding with either of the lines, don’t turn in that direction. Is that an efficient way of doing it?

I think the first option will be more reliable in long-term, as I eventually would like a bunch of boids to wander while avoiding objects.

I meant to use both of them in the same time. It would be like 2 mode of avoidance:

I’ve also been experimenting with making two lines that point 45º in each direction, and if there is an object colliding with either of the lines, don’t turn in that direction. Is that an efficient way of doing it?

It is pretty excluding and you will find yourself with not taking into account all the obstacles that can be in between. Not sure it sill be really efficient.

I used this approach in my AI for 2D Games library, it is based on the book ‘Programming Game AI by Example’ written by Matt Buckland.

Consider a boid moving through a series of obstacles whose collision areas are represented by red circles. 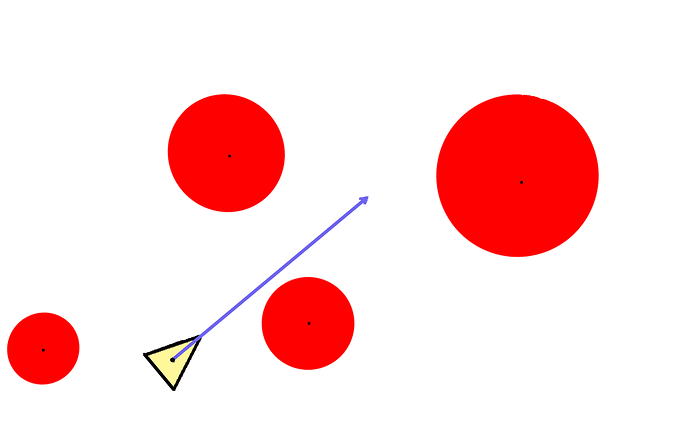 obs0.png1020×663 21.9 KB
The problem is that determining whether a rotated box (the detecting box) intersects with a circle (obstacle collision area) is not a trivial matter. It is even less trivial to determining the intersection coordinates, which are needed to calculate the lateral and breaking forces.

The trick here is to calculate the obstacle position in the boid’s coordinate space. 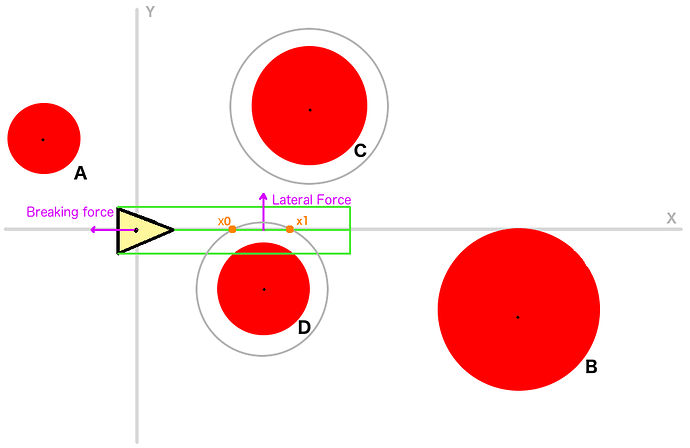 So if we consider each obstacle in turn.

The next step is to calculate the 2 intersection points between the extended collision radius and the x axis, x0 and x1. We iterate over possible obstacles and use the one with the closest intersection point i.e. smallest x0

Finally the breaking force will be inversely proportional to the distance x0 so it increases as the boid approaches the obstacle.

Thanks everyone for your help, I’ve gotten it to work now!

Hi @Sarah, I have got to this site searching for the same. It would be wonderful if you could share your results!