Recombining 2 bytes into a signed int

Sending a byte stream over from an Arduino which includes some int16_t values (little endian) but struggling to recombine them. This is as close as I can get, but I loose the sign.

Thanks but I can’t see an answer to my question there.

I need to use a byte stream for speed.

Sending ASCII and dealing with strings and tokens is way too slow for my requirements.

I’ve got this example sketch which uses a FloatBuffer:
forum.Processing.org/two/discussion/12757/transmission-of-a-float-through-a-serial-link#Item_5

But you can easily adapt it to use a ShortBuffer instead:
docs.Oracle.com/javase/8/docs/api/java/nio/ByteBuffer.html#asShortBuffer–

However I think you’re gonna need to switch your Arduino code to send bytes as big endian, which is the default protocol for transmission AFAIK.

I think that should work.

I think that should work.

It does not work. 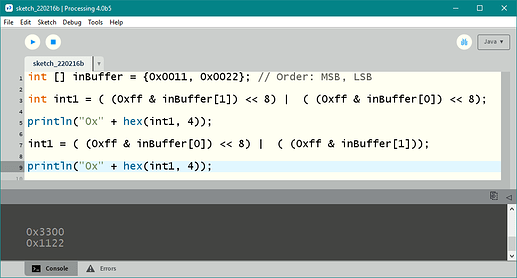 oops, thanks for the correction =)