Python Processing refer to an object from main script

OK, I just started learning Python & I never liked how people had the classes on same page everything else went on. So I placed them on another page, but sadly I don’t know how to actually get to them. I liked one of the tutorials I was doing and tried to make it more. I tried using import sounded good but still running into errors.

here is sketch, the main page that I don’t want the classes on

There is an old topic from old processing forum 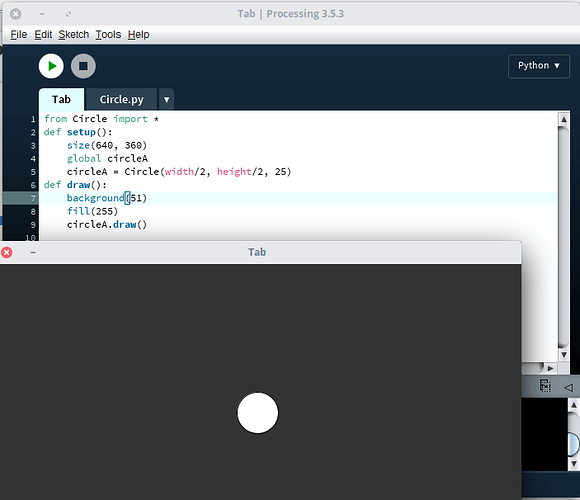 do I need to import on every tab?

as you can see I placed important in it so he can get Warrior class, but it still says Warrior undefined, guessing it can’t find it

for me it just work fine. Try to delete ~$py.class things in the folder and rerun? got it work? 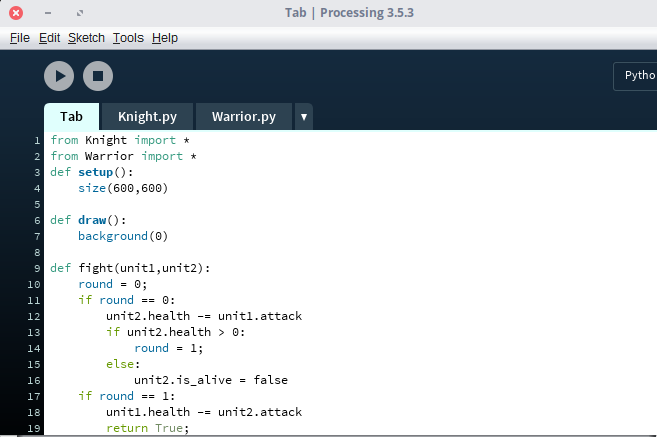 TY, it worked after I closed and opened it now I need to try and solve the next part after I understand what it wants me to do. TYVM

IMO, the Python Mode’s dev made a bad decision on how to deal w/ multi-tabbing in Processing!

In Java Mode, when we create a new tab, by default that tab is of extension “.pde”.

And when we run the sketch, all “.pde” files are concatenated as 1 “.java” file.

So there’s no import among “.pde” files, b/c they’re treated as 1 file after all.

However, does that mean there’s no way to have some kinda module system under Java Mode?

Actually there is! When we create a new tab, we have the undocumented option to name it w/ a “.java” extension.

Therefore, it’s not a “.pde” file anymore; and now import is necessary in order for it to be available for the “.pde” files, just like any other Java library!

Instead, he’s forcing all additional tabs to be treated as a Python module rather than letting us decide which 1s we want so!

It should just default all extra tabs to be of extension “.pyde”, and concatenate them all as 1 file when we run the sketch, just like Java Mode.

Actually, both modes should offer 2 ways to create a new tab: a regular 1 and a module 1.