I have encountered a problem with the alpha color component when experimenting with plotting points to represent Collatz orbits. See Wikipedia: Collatz conjecture.

This code does what is expected: 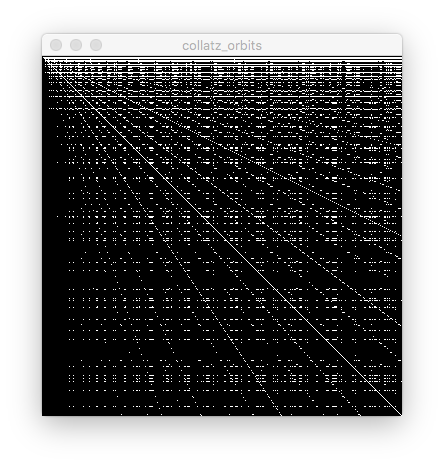 If I comment out that statement and uncomment the previous one to use this statement, which reduces alpha to 254, the result is quite different: 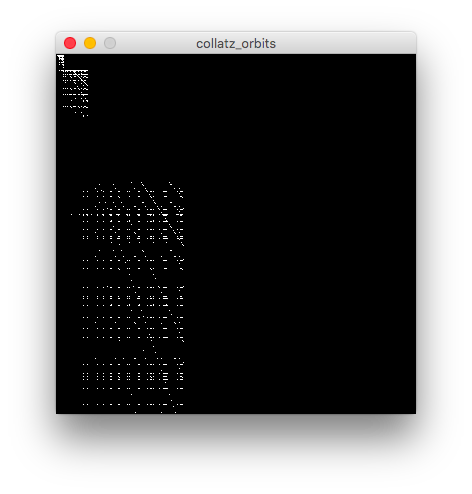 Many points are missing.

I have performed much experimentation, and found ways to work around this problem. For instance, using squares consisting of a single point, utilizing fill with transparency and no stroke, produces the desired result. However, I would still like to understand why reducing the alpha component from 255 to 254, when plotting points, causes the observed problem.

In case it matters, I am doing this on an old MacBook Air with El Capitan.

It seems this issue isn’t restricted to Python mode. These two code listings produce the same result (depicted below):

Interestingly, it’s the same areas of the screen (as your sketch) that are blank: 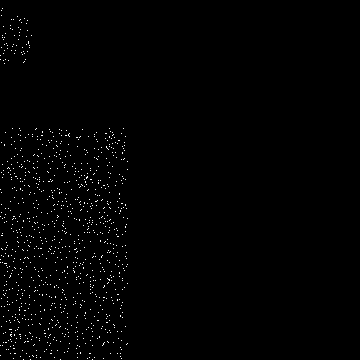 I deleted the noSmooth(), which solved the problem – I figured it’s something to do with how Processing handles strokes. So I re-added noSmooth() and tried a strokeCap(PROJECT), which works.

… tried a strokeCap(PROJECT) , which works.

It seems this issue isn’t restricted to Python mode.

Yes, since it’s Jython, and Processing is based on Java, that seems to make sense.

Since p5.js is JavaScript, independent of Processing Java Mode, I translated it to p5.js. Here is the code without strokeCap(PROJECT):

As expected, it also works.

FWIW It seems that point in the various ports of Processing doesn’t handle the cap in the same way.

point() does not respect the stroke cap

I still think it is odd, that you see such a big difference between stroke(255, 255) and stroke(255, 254).
Since the Python version needs to be consistent with itself - maybe it is a bug?

In any case, the documentation of point in Processing.py ought to say something about caps.

I had tried much lower alpha values, with the same unfortunate results as with a value of 254. I was plotting points using a variety strokeWeight settings, in order to play with translucent overlaps, and when I chose a strokeWeight of 1, the problem became evident.