i have a problem with my player, i cant find a way to put it properly in my world. For now it spawn in the middle of my screen and so all his coordonates are wrong.

here is my World:

Sorry if its a dumb question but i cant find a way.
Thanks for yours times.

Can you give us more detail on your coding environment? You don’t have a draw or setup function so we can’t run your code.

i work on Eclipse with java,

here is my Game class:

Oh cool, that was fast.

From looking at your code, it looks like you’re intentionally placing your character’s position vector at the center of the screen location inside of world space. Other than trying to “find a way to put it properly in your world” can you describe to us how you would like to place your character in the world?

yes, i know thats the way i found and its bad. In the centre of my world should be perfect and then my screen should follow my player.

As it stands, your main loop is this (simplified view)

Sorry for the long breakdown, but it makes it easier to understand this picture: 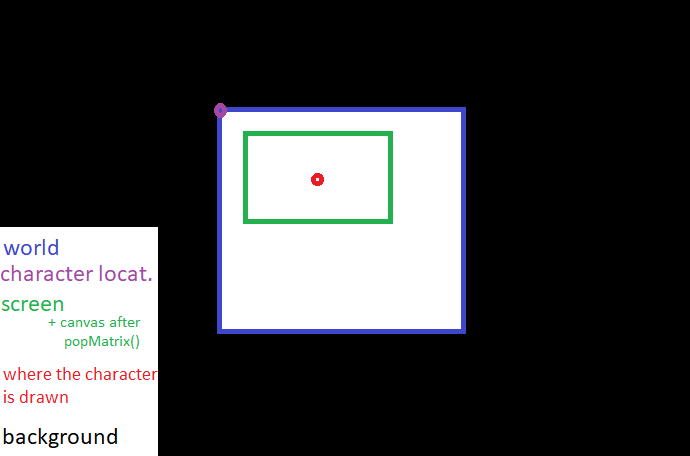 ok now i start to understand what is my error

It sounds to me what you want to do instead is…

and then in the run function…
pushMatrix();, then
Translate to where the world is relative to where the character should be rendered

then draw the world as you already do
When you pop back, the center of the screen will already be where the player’s position should be.

For an explanation as to why player.position.x-worldW+width/2 results in putting the left edge of where the world should be drawn, check out this poorly drawn picture: 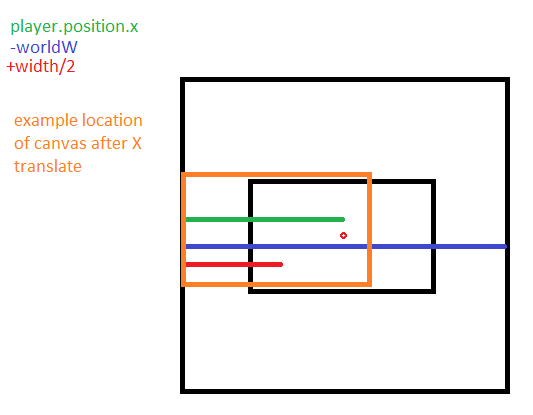 Basically, if you add the red and green lines together, the difference between those lines and the blue line happens to be the amount you want to shift the screen over to the left.

Do the same for the vertical direction and it’ll take you to where you want to draw the world.

how can i fix that ?

Don’t forget to give me a

if I helped you out! there’s a button for it on each post.

its not what i mean, i tried with an other object to check the coordonates, my player have his coordonate inverted.

The first step is to invert the controls. You want it so that when you hold right, your player’s x position increases, and if you hold left, your player’s x position decreases. You should have the functionality of movement working first, since that part “worked correctly” before messing with your graphics renderer and positions. You’ll then want to edit the graphics end so that it properly positions your character based on that.
That would make the translate line something like

Keep in mind what I said in my last message was specifically because: you want the parts of your code to be logically sound. It’s better than applying layers of hacks one on top of another to get a desired result. Do the parts that should be correct the way you know that they should be and then fix the rest afterwards.

I hope that works for you!

ok thanks a lot, I adjusted the coordonate and now it perfect.

Thanks for your time.