It used to work before I reinstalled windows10 and updated Java about 2 months ago. When it did work, I was able to run the Wind Tunnel examples. I’m not sure if I ever tried it in Processing 2.2.1, but it does not work there or in any Processing 3 variant, including the latest 3.3.7 For what its worth, the basic example FlowFieldParticles does work, so the problem isn’t with the entire library.

Here’s a shot of the error message I get in every version of Processing I have. What does it mean and how do I fix it? 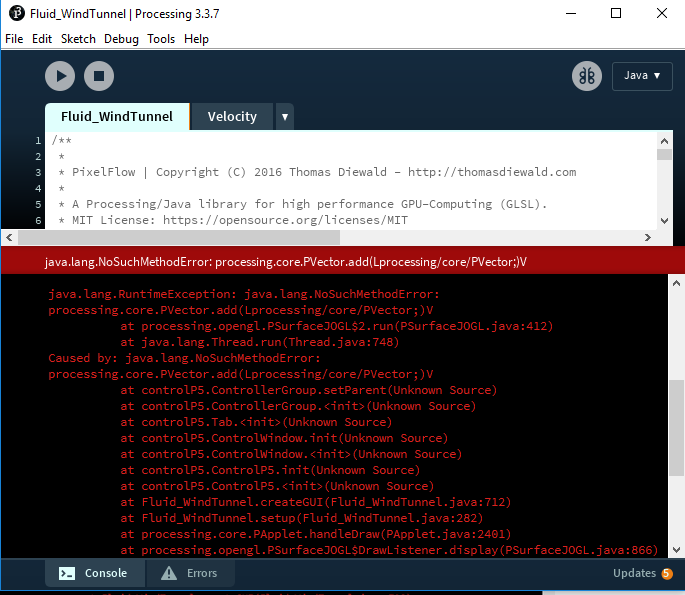 It Would be easier if we had some code, But what i can say is that your processing apparently does not have the PVector method .add(PVector), which should be in the Core… maybe you deleted it by accident, or somehow it can‘t Access it. If it is one of the first things that are executed, then you might have changed where the default path for processing is. I had a similar Problem with Access to the internal .net library. But that was because i named the file as Client, which interfered with Finding the class Client… since they are the same name… anyway, try to See if there might be a Problem with that, and please add some code (best would be everything before the error is called). Just add println(„somthing“) at the Start and Slowly work towards where the Problem lies.

runs despite many GL_ERROR ( white info in console )

or did you download from https://github.com/diwi/PixelFlow ?
there i see all updated one year ago.

It might be that controlP5 was compiled for an older version of Processing. I would try to use a different version of controlP5.

or first try to run any of the CP5 examples

Thanks, I’ll fiddle with CP5 examples and see which version I’m using and if I can get around it. A basic PixelFlow example without CP5 does work, so thanks for putting me on the scent. Where’s the bloodhound emoji?

The title of this discussion is misleading. PixelFlow works just fine with 3.3.7 Processing. CP5 was not working and needed updating. I updated it after trying an example and got the error about PVector. Both work now. I can now play with CFD.