Output in Text file or spreadsheet possible with Processing?

Hello dear Processing-Community!
I am completely new to Processing as well as relatively new to programming in general. Someone suggested to use Processing for a task I wanted to achieve but now other people are telling me it is difficult or easier to do with other tools.
So here’s my task and the related questions:
What I want to do is

To illustrate what I want, I have created a small graphic:

Hope I made myself clear, thanks in advance!
Astrid

It’s completely possible, and pretty easy. It might not be the fastest or most efficient way to do this, as streams, readers, writers and other raw Java stuff can accomplish this better, but it’s certainly understandable.

Hold on, I’ll reply to this thread in a few minutes with a Processing sketch that does everything.

Oh, thanks! Already good to know it can be done!

…in a few minutes…

Well, about an hour later, I’m done.
The code below does the task, with some commentaries to tell what’s going on.
For the “second output file”, I decided to go with (2, 1); style coordinates instead of B1; as otherwise it tries to use characters beyond letter Z if the image is too wide, which results in a bunch of punctuation characters, followed by lowercase letter set, followed with more technical symbols and letters from other languages your computer may not understand.
Although if you need that, you can uncomment a few lines that are pointed by the comments in the code.

Save it as a sketch somewhere, go to “Sketch” submenu at the top of Processing and in there select “Show sketch folder”, drop your image named the same as what’s in the code into the folder that opens, and run to get 2 additional files near it.

It seems to finish near-instant with a 100 by 100 size image. Not sure how long it will take for bigger images though, but shouldn’t be too long.
Have fun!

Hi Architektor-4 - wow, I’m impressed! Works perfectly! You don’t know how long I have been thinking about how I could solve this

I will study the code to learn

Don’t know but can I do anything for you in return?

No problem!
If you don’t get what is something or how something works, Processing reference can be really handy.
https://processing.org/reference/
Or, right in the code editor, right-click a function and press “Find in reference” to have it instantly open in your browser - available without internet - really handy!

About anything in return, honestly I don’t know myself - I’d feel bad taking anything from someone on the internet as reward for writing a bunch of simple(for me, at least) code… ._.

Well then, thanks a lot!

@Astrid – do you mind sharing what you use case is for this kind of pixel analysis? Is it for an art project, or for data analysis or forensics of some kind?

I recently started using JSON objects to store and extract nested objects inside of my Processing projects. I have an example of it with the code available on github.
JSON UI Encapsulation 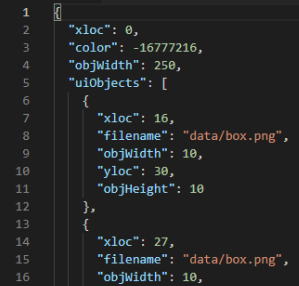 doesn’t answer your question but I hope it inspires a bit.

@jeremydouglass - it is for an art project. Quite simple actually - and still working on it…