Orientation of the 3D space

I played around with 3D shapes and I noticed that the way the 3D space is oriented is not the one I would have expected.

The picture below represent: 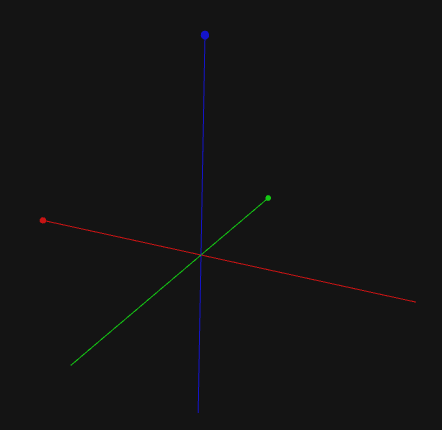 Is there a particular reason why it was setup like this?

For a 2D sketch, which most people are usually going to start with, the system is orientated so that the top left is (0,0), X+ is to the right, and Y+ is down - similar to how people write on paper. I believe the lore is that this was an attempt to make it easier for new programmers to understand.

Adding the third dimension, Z+ is in, so things with large Z seen father away, making Z the distance from the viewer. Again, this is easy for people to understand.
EDIT: Ignore this bit.

What results is a left hand system. Expert users are not alarmed, however, as a simple call to scale(-1,1,1) can resolve this for them.

… At least that’s what I was told…

No strong opinion on the Z-axis, but the 2D and 3D systems both have x,y axis that are logically consistent with each other – so you get similar behavior if you change from P2D to P3D rendering.

The decision to use piece-of-paper orientation was originally in the context of 2D, I believe – for some in 2D it can also be surprising that the origin is in the upper left, not the lower left. Thankfully 2D and 3D are consistent with each other. I think that is the most important thing of all.