I made a version of A.K.Dewdney’s famous Wa-Tor -
https://toys.alienbill.com/wator/index2.html
I used instance mode, because I wanted to have the main cellular automata area send data to a seperate canvas for it to graph.

That graph is a phase diagram (showing a predator population vs the prey population, changing over time) and it’s much more efficient to not draw the whole thing from scratch each frame, but I wanted a current position marker, so I thought I’d make an offscreen buffer and update it every frame then image() it to the main drawing area and then draw in the pointer: 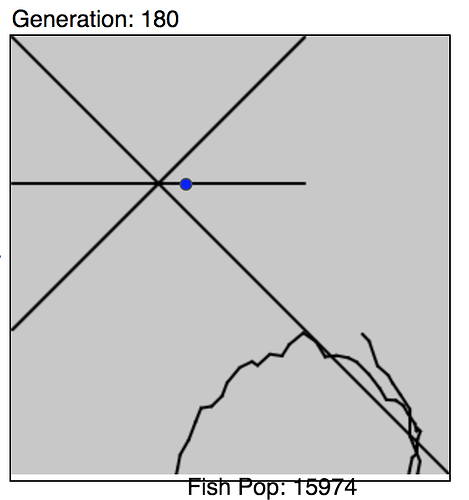 It seems computer specific - (no difference with behaviors on safari) and also on a third mac, it’s broken, so the odd thing is that it ever works at all.

I don’t know if I’m paying too fast and loose with (multiple) instance modes or what - but I’m surprised to see it break in such a subtle yet consistent way.

Anyway, the code is there embedded in the index2.html (index.html is now a version that just draws directly and skips the blue pointer)

That offset looks like it is exactly width/2, height/2. Any chance that a width/height initializer is being run before the width and height being referenced exist, so that it is 0,0 – but then, later, it is 200, 200 (or whatever)?

Hardcoding dynamic references to width and height to a constant variable could be a quick workaround to see if that is the issue.

Can you try to isolate your problem into a small example program?

On further review, may have been a previously fixed bug and I’m guilty of “using whatever p5.js file I have around handy”
see it fail here on some machines: https://temp.alienbill.com/offscreen_p5/
using a p5.js /*! p5.js v0.4.20 December 11, 2015 */
but it works here:
https://temp.alienbill.com/offscreen_p5/index_cdn.html
using
cloudflare’s ajax/libs/p5.js/0.7.2/p5.js

Mildly interesting even the old version works on a Macbook Air, but I think the dev team would have more interesting problems to work on than an already fixed bug

It might be worth running a diff on those two files to inspect what changed, so you can keep an eye out for not reintroducing the same (possibly subtle) problem again.

Well, yeah, but I suspect 2-3 years of p5 dev might have plenty of other differences, so I think my takeaway for me as a casual coder is making sure I use the latest p5.js (I don’t like to pull it offa CDNs tho, for linkrot reasons)

Ah, I misread you – I thought you were saying different versions of your sketch, not of p5.js. My mistake.

… as a casual coder is making sure I use the latest p5.js…