EDIT: Got it sorted, thanks everyone.

My arduino program and device appears to be working correctly, sending the appropriate info out to serial. From reading through the console prints in processing, it is reading the inputs into strings correctly. I’m just hitting a wall in terms of figuring out how to do different things with the sequential inputs.

The arduino device uses a 4x4 keypad to perform various unit conversions, triggered by the A/B/C/D keys. It sends over the letter of the key pressed, followed by the numbers entered into, and returned by the function. The D key toggles between Imperial to Metric, and Metric to Imperial, and outputs a boolean state status.

All the variables are Strings, since I’m using the info from serial for text displays and they don’t have to be used for any calculations within processing.

Copied below is a section of the serial.read code. Inputs from arduino are in the format of:

How should I go about changing things to be able to accept those 2 or 3 inputs into separate, useable items, and then acting off of them?

Was suggested to look into Serial Event as a possibility, but I am not understanding the formatting and syntax for how that works.
https://processing.org/reference/libraries/serial/serialEvent_.html

that is the given general format, but the example code looks like

is the choice of “whichPort” just whatever you arbitrarily want it to be, or do you have to use something like your actual myPort variable declaration?

Ok, so I played around with it, and that does seem to be whatever. Arduino site talks about using it for when you have multiple serial inputs, so I’m assuming it’s similar here? Since I only have one serial input, it’s an arbitrary choice.
Still leaves me with figuring out how to sort the inputs, which is essentially square 1.

1 Like
Comparing serial Arduino inputs with Strings in if-statements don´t work
noahbuddy May 2, 2020, 4:51am #2

I see that you are assigning dPort to inPort then comparing to “1” and “0”.
The trouble is that the variable inPort must have been equal to “D” just before that.

the .equals() method definitely gives me a big step needed, because I couldn’t figure out how to get it to recognize specific inputs.

It is currently sending everything as separate lines, like:
D\n
0\n

and the following arduino code:

For testing and troubleshooting, and am unable to get it to recognize the specific inputs.

Try comparing against trim(inPort). The string may still include “\n”. (my memory is a little fuzzy and I do not have an Arduino set up at the moment)

For testing and troubleshooting, and am unable to get it to recognize the specific inputs.

I am assisting with your existing code and troubleshooting efforts.
Once you get that working take the next step.

Your code with comments added:

Give careful consideration to the variables used and the order that you are doing things.
My edit of your code: 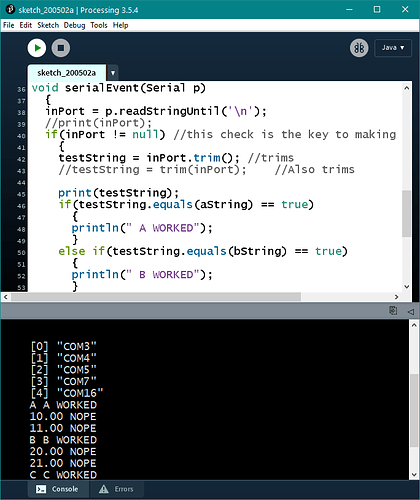 @glv
Thank you so much, that works!

Now to figure out how to take following values and save them to other strings for use elsewhere.

Once I got the .equals() going, the split finally worked. Thanks. Will update once i’ve gone through and updated everything.

Got it sorted out, thanks for your help. Functional code below: