So i am trying to detect some test tubes with a webcam, so i can pick them up using a robot. I have successfully detected the straight lines and from there i can get the position and orientation of the line. For this task i am using OpenCV library for Processing and then using the linedetection (see picture) 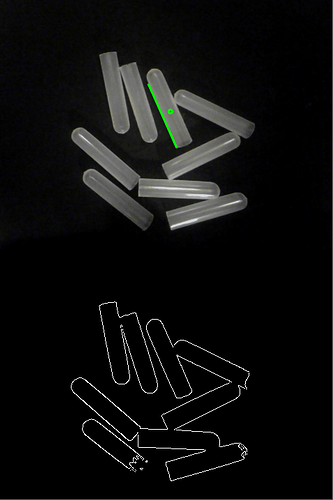 Are there anyway to install the full Java OpenCV package for Processing? I could not get it to work, since there was no jar. extension in the OpenCV (for Java) download.

Any other way of detecting a half circle in Processing are welcome as well.

I have two suggestions that are related but not sure if it will provide you a desirable solution. I suggest you explore the provided examples that comes with the libraries:

Thank you for the quick reply.

Blobdetection will only draw an outer line around a cluster of pixels with the same colour, which is basically what i already have when i draw the outer perimeter.

BoofCV have an elipse function, but it seems that what it does is fit an elipse around a blob… and in this case the blob will be the whole test tube (or maybe more if they lay close to eachother, as some of them are in the attached picture).

What i need is to search out circles in the picture and then sort them by a min and maximum diameter.

Ok, I was sort of writing a long post of one approach using this: http://boofcv.org/index.php?title=Example_Detect_Lines

However, I discard it and I think it is better if you use the example from blobScanner (not sure if this comes with the blobDetection library or is another separate lib). You should run the example that comes with this library. In the PDE, go to File>>Examples and then Contributed libraries>>Blobscanner>>blobcontour>>drawBlobContour, this last is a pde file. If this example works for you, it will make your life sort of simple. My understanding is that you apply a filter to make your image bichromatic and then the algorithm will return a set of points that border each test tube. The challenge here is that each test tube needs to be identified as a single unit which might not work in your case unless you create an algorithm that fixes this issue.

This would be my approach.

I did think along those lines (get it?

), but as i see it there are two problems with this approach:

@Palmhoej – on the Processing OpenCV library repo there is an open issue on Hough Circles, and someone mentions a partial workaround:

Issue: Is there a circle Hough Transform in this library?

I was thrilled it looked exactly what i needed. I tried the different examples, but it all came down to that the:

Did not exist, probably because it is not implemented in the Processing branch of opencv.

Same history with the findCircle command

The partial workaround, as far as i could tell (was just 4 lines of general idea coding) looked like it was just a bloop detection followed up with a bounding box and the draw a circle inside this box. So basically it did not look for circles, but if your image consisted of only circles, it would be able to draw a circle around these… unfortunatly my pictures does contain other thing than circles.

But thanks for the answer

Maybe i will have to move over to Java to be able to use the full OpenCV. Its just a shame, because i feel that i came very close with my code in Processing. I only needed the circle detector.

ArrayList is built in to Processing.

An ArrayList stores a variable number of objects. This is similar to making an array of objects, but with an ArrayList, items can be easily added and removed from the ArrayList and it is…

If you are using a library that does not include it and needs it, you can also import it from Java at the top of your Processing sketch .java class file with import java.util.ArrayLIst

Okay so here are the code i tried to run… it complains about the Arraylist in my processing. If you find a workaround i would be thrilled, since this code is exactly what i am looking for

could you copy paste you specific error message? 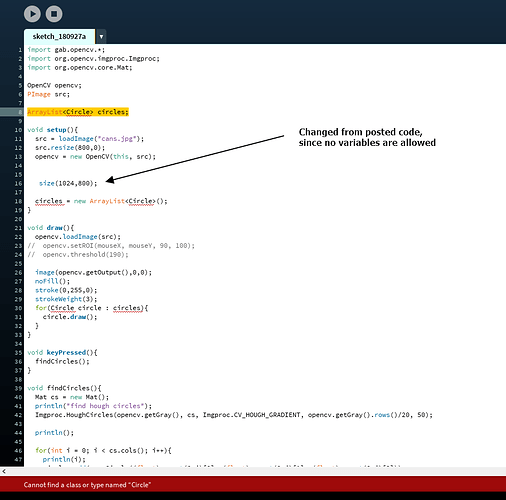 That makes sense. There is no object / class named “Circle” built-in to Processing – so it doesn’t know what an ArrayList is. As far as I know there is also no Circle built-in to opencv…?

Perhaps your original source for that line of code also included a .java file Circle.java, that contains a class definition…?

Hi there, I too am interested in your results. I am writing an app to determine when the person Blinks, and then do something while they are blinking, I am using open CV in processing and it sort of works , but slow. I think if I can apply, Hough Circle Transform, I would be able to focus on the pupil, and everything will run much faster. How were you able to use this inside the processing IDE? Did you find out the line that you need to put on the top to import it from Java? the OpenCV library for processing does not include this… at least I have not been able to find it…