I’m making a fighting game where warriors come from both sides and meet in the middle. ATM I placed them in the middle because the map not done yet. Anyways I was trying to set up the fight but the way i’m trying to do it isn’t working. Can someone look at my code posted below and tell me if my thought process is even cabable of doing.

hi,
your code gives me error 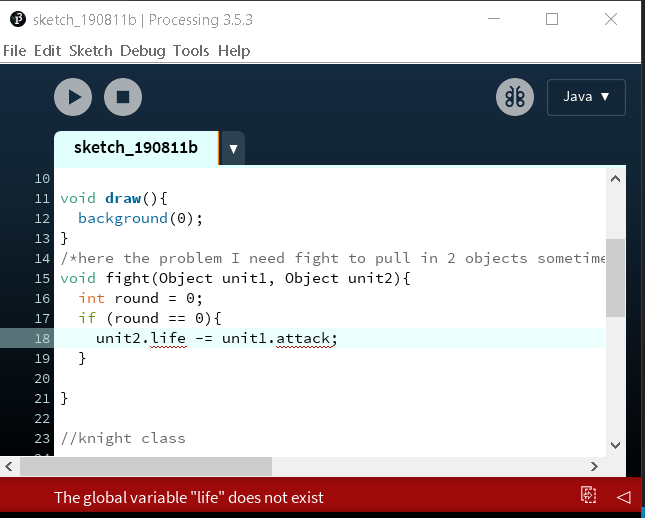 if you use a common super class Fighter
with
Warrior and Knight as sub class it is running here ( processing IDE 3.5.3 / win 10 )

Yes it gives that error because it looks for life as global and not under unit1 or unit2. idk how to fix it. So you fixed the problem & I still can just list the enemies like I had them?

not understand that question?
-a- did you run my code on your system?
-b- did you try to make more Fighters ( as Knight or Warrior )?

yes, i reduce your example to just what i needed for test
and change other small things

but for make more Fighters, also you might consider to use “array of class” structure?

ok, wasn’t sure sry I’ll try your code. I’m trying to copy a game i found on a site. It takes you step by step through making a fighting game but its in python.

TY, the problem I’m having with the python after this post is understanding what they are asking of me. I do love your advice of how to change languages.