Hi Nice to see you here, it would be great that if you can spare some of your time to help me go through this. I have trouble implementing multiple window application on Processing.

Basic Background: I am developing a software for brain-computer interface to get my graduation thesis done, I want to configure it like this.Fig1The purple area is the control panel. The gray area is the layout for the sub-window. If the users want to have a new sub-window, they click the Plot , Fig2 show up , and select the time series Plot( three ways for visualizing the brain signal as you can see), the control panel will generate a new subwindow to show the brain signal in the time domain. For the exact design for subwindow, it has plot and configuration droplist. Like this Fig 3 It has both the Plot component and the configuration component. 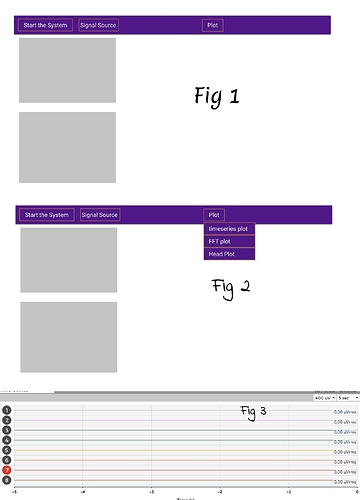 Based on information above
So I need a multiwindow display:

Then I search online:

G4P can help me with1 definitely. For 3 there is a solution but not seem convenient if I have to manage multiple sub-windows.

So I want to make a new class extended from G4P so that I can manage each sub-window as a new object. pseudocode should be like

In summary, I am looking for a way to make the view of the subwindow customizable while keep the good feature of the G4P( close the main window without closing the main thread) and My solution is to consider each type of subwindow(timeseries, FFT) as types of class so that I can put the controlP5 and Grafica component into these classes which will ease my development. But I did not find a way to extend the Gwindow object of G4P like pseudocode here.

it would be very nice of you if you can provide help or just leave some comments. Plus: I am also open to other ways to implement it(or another language).
Appreciate your time!

One possibly way might be to draw the single program outputs on separate PGraphics of the size you wish. Then you show the PGraphics canvas in the position you want.

Is your goal that ControlP5 and Grafica be sandboxed in each GWindow – e.g. so that none of the ControlP5 elements in one window can affect / communicate with another GWindow or the main sketch?

If not, have you considered a composition approach as an alternative to inheritence? Create a class that contains a GWindow and your Control elements, then pass the GWindow to the elements as their target PApplet. Use the elements as normal, and they render to the target (untested!)

Normally you could render elements to PGraphics buffers and the draw those onto the windows you want, but I believe that ControlP5 does not render to PGraphics: “drawing into a PGraphics object is not possible since an instance of PApplet is passed to each controller for being drawn.” ** Of course, GWindow inherits from PApplet…

@quark is the expert on multiwindow g4p applications. In general I’m not sure about the strategy of mixing both GUI libraries though – it seems like introducing a lot of complexity to be working with two GUI libraries at the same time. If you really want ControlP5 elements in multiple windows then I think the demo is to use an awt frame rather than a G4P GWindow-- would that meet your requirements?

Also possibly relevant to you if you go the G4P+CP5 route:

Are you the guy I have been exchanging emails with over the last few days?

Yes I am, And I ended up with concesion to single sketch…

Thanks for your reply, I have tried it, I will post it later on. because it does not work well for my case. Be short, I set a globale ControlP5 cp5, created the GWindow window, and created buttons in the window, but it is not stable. By stable I mean it worked without adding draw method to window. However, after the draw method is added, it sometimes crashes, and I have to use force quit. I really do not want to deal with this java->processing->g4p code…

Thank for you reply, you words enlight me to dig deeper, but yeah, I failed… the failure was in my reply to jeremygoudlass.

It is possible to create simple windows in Processing V3 this link provides one way. You might try this with controlP5.