i have an app that is quite ok; it s a very long and complicated thing but it runs, through a server and with multiple clients && rooms.

I have tested it in a lot of situations; as everything looks fine now i try to export it. If i export it “normally” not any (new!) problem; but i would like (for desktops) to export in present mode.
But if i do so i get a lot of big problems because the app is using multiple JComboBoxes (!editable) with lists (of players, of rooms…); so = if i set the JCombo loc outside of the app i get (MACOSX, sierra) a kernel panic and must restart the computer… but that is not done because even after restarting the app is always here and blockink every action or menu…Of course the stop button does not work…Solution is restarting again and using command line delete the app: not very confortable! -
After that i decided to give to my combos a location inside the app: no more krash and the combos appear at the beginning…Super! except that when you click on the app (and it s needed!) the combos disappear behind the app and i cannot see how to put them in front of the main window. I suppose that all these things are caused by the way P5 makes its present mode (A JFrame???) - anyway my question is : is it possible to use combo (or other java elements like that) with present mode P5. BTW that is probably a question for Peter Lager…
Below a code snippet in order to experiment. Dont change the loc of the combo if you want to avoid the kernel panick!

ps+++ sorry but my combo is using an image: the name(“combofondgris.png” and size are in the code and you can put what you want instead of mine

set the JCombo loc outside of the app i get (MACOSX, sierra) a kernel panic and must restart the computer

Below a code snippet in order to experiment. Dont change the loc of the combo if you want to avoid the kernel panick!

This sounds terrible! It also sounds like perhaps a Java / MacOS or Java / FreeBSD issue. Perhaps…?

@jeremydouglass====
thanks for replying (this topic has had only one answer: yours! - and yet, when it happens it s rather impressive…) - The first link you provided describes something which seems to be similar: necessity of restarting the computer and killing the process), yet it speaks about actions performed with the JCombo : in my case not any action is performed it s when the JCombo is created that the panic starts, in present mode && when i put its loc outside of the PApplet window: so i think that it could be of interest to look at this “present mode” more in details; as for now i suppose that it is a JFrame (with display size and loc(0,0) to which all other components are added. If it is i can understand what happens: when i put the JCombo inside the app window and before it, processing puts it behind and does not add it to the JFrame, so it disappears and is unreachable; and when i put it outside, as the JCombo is itself added to a JFrame, i suppose that there is some kind of incompatibility. If this is true what work around, i am thinking to that…

Glad that was helpful – good luck!

this topic has had only one answer: yours! - and yet, when it happens it s rather impressive…

The issue may be in part that very few forum members mix using javax.swing with their Processing. Instead, they often use combo box elements from e.g. G4P or ControlP5.

It is also the case that a bug that causes a kernel panic isn’t something many people are excited to help test, unless they are core / library maintainers. In this case, it currently seems like this is likely a swing issue, not a Processing issue, so I also doubt you will be able to get much help from posting to Processing github issues (although you could always try) unless you have more information from inspecting the output. Even if there is a problem with the preprocessor, swing should NOT be kernel panicking…

@jeremydouglass===
i agree with you && as it works (with my combo) in debug mode or exporting not full screen in some sense that is not a P5 issue; yet it involves clearly the P5 present mode that i have already verified to be weird in some conditions (images repeated a lot of times, i have posted to github about that and seen that i am not the only one to have encountered this issue) - That s why ASAP i ill get a look to the source code for it… As for using G4P or ControlIP5, sorry, but i am not able with these libs to make a combo like i have done with swing! - More: i am not sure (i have to try) that you can set the loc of the combo OUT of the main window and even if it s possible that exporting (present mode) causes the same kind of problems…

You seem to be using Swing components inside the Processing IDE.

If that is is true then you have a problem because you will get conflicts between the two event handling mechanisms, Processing vs Swing

if i set the JCombo loc outside of the app i get (MACOSX, sierra) …

Do you mean outside the JFrame or something else? Can you show the code that causes the Kernal panic?

when the JCombo is created that the panic starts, in present mode && when i put its loc outside of the PApplet window

which suggests you are adding the combobox to the main Processing Window.

While you think on that I have a few observations.

Your code above works because you are segregating the Swing components in their own JFrame. You can visualise this as two linked applications each using its own event handling mechanism. This will work but each window has its own main-event-handling thread so there is a risk on modifying concurrent data exceptions.

I should point out that I haven’t used presentation mode with Processing so what I have said is based on general knowledge and experience gained over the years.

@quark===
thanks for replying; i try to be more precise:

I decided to have a look at Present and fullScreen modes.

The Present modes simply hides the desktop and any open windows. It is possible to bring another window to the top using cmd + tab (on the mac, not sure what it is on Windows) but they disappear again when you click on the main sketch. BUT that is what is expected in Present mode.

In your description you are still not being clear about positioning the Combo box e.g. you say

but a combo box can only be added to a windowed component e.g JFrame or JPanel, do you mean the JFrame containing the Combo was located outside the main PS window?

There is no forum member called quark===, you need a space after the k to get my attention

do you mean the JFrame containing the Combo was located outside the main PS window?

yes, that is exactly what i mean: i create the combo with its items and so on, then i create a JFrame same dimension than the Combo and using my class PanelFond add to it a an image as background.
After some researches i see now that the problem is not with the JCombo but with the JFrame: you can easily verify it creating a JFrame in the most standard Java way and try present mode or ! present mode; trying that i decided to add to my JFrame .setAlwaysOnTop(true): and miracle it works in present mode…Even with exporting ! Code snippet below;
ps1= tried with the combo: same (good!) result…
ps2 = i dont understand why you say that it is not a good idea to use swing components inside P5?

You got my attention

i dont understand why you say that it is not a good idea to use swing components inside P5?

Your code above works because you are segregating the Swing components in their own JFrame. You can visualise this as two linked applications each using its own event handling mechanism . This will work but each window has its own main-event-handling thread so there is a risk on modifying concurrent data exceptions.

I am not sure how clearer I can make the explanation, but here goes

If you run a Processing sketch using JAVA2D then the window opened will be a JFrame. The running sketch will have a main-animation thread to handle rendering and event handling and managed by the Processing core. For instance it will catch mouse events and call the appropriate event handler, for example

Since the main application is inside a JFrame then it is possible to add Swing components directly to this frame. This is not recommended and should be avoided.

The reason being is that it would create a second event-handling thread a Swing one. The two event-handling mechanisms, Processing and Swing, would conflict.

thanks a lot: now i understand what you are explaining; and of course it not at all a good idea to add Swing components to the main P5 jFrame, i agree absolutely : but as you have noticed that is not what i am doing: i create another independant JFrame and, putting it OUTSIDE of the main one and topLevel ordered; in this condition it seems to me that there cannot be any concurrent exception (though i will add this exception into the code for combo selected items, just for seeing). Anyway thanks again and thanks for your lib which my app uses for creating a lot of buttons and much more, except this awfull combo because i have not found the way to make what i want - image background- x ouside of the main window- with your lib)…

@quark === perfect!!! - and image background for a combolist (i dont know how you call that)?

Unfortunately that is not possible with G4P. Can you post a picture of the combo box showing what you are doing?

@quark ===
ok; as you can see my background at this moment of the game is only a texture, the same as the main window, to the right. the dark green comes from the present window color, pref settings. 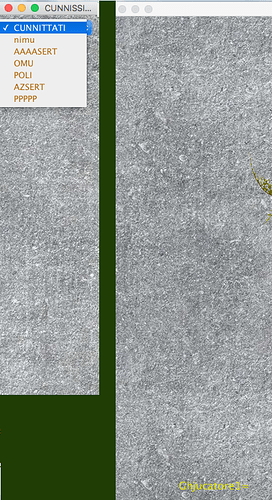 So it is the background of the JFrame that has the texture NOT the combo box G4P can do that,