I have a central function that I use to project 3D {x, y, z} coordinates onto a 2D picture plane. For a number of reasons, I can’t use any of Processing’s 3D functionality for what I’m doing.

I’m hoping to find a way to depth sort all points so that I can then use a cropping function to remove anything that’s behind something else. In order to do that, I need to know the distance between each point and from the camera, and I don’t know where the camera is in {x, y, z}.

Can anyone point me in the direction of determining the position of the camera/eye? This kind of math does not come natural to me.
I have all the other pieces in place, and I just need to automate the depth sorting before cropping.

Any help would be greatly appreciated.

Replying to myself here.

Camera distance isn’t the best way to put it. Because this is orthographic/axonometric projection, there isn’t a singular viewpoint the way there would be with point perspective projection.

What I’m looking for is the distance from each point to be projected through the projection plane to the viewpoint plane.

I can’t use any of Processing’s 3D functionality for what I’m doing.

Because this is orthographic/axonometric projection

Does that mean that you are using ortho()?

Do you mean that you don’t know the default location of perspective() as listed on the reference page,

…or do you mean that the perspective is changing at runtime and you don’t know it in general?

This question might be a bit less mysterious if you provided a minimal sketch, or at least your setup().

Yeah, I think he does all in P2D and does the projections by hand…

Seeing the Sketch would help

Thanks for the responses.

as Chrisir guessed, I’m doing everything by hand. I’m creating and cropping line work, and because of that, none of the built-in 3D projection functionality completely suits my workflow from the Processing sketch onwards through my process.

I’ll try and strip what I’m doing down to a minimal example. It might take me until the morning to get that together.

I made a quick semi-accurate illustration of what I’m talking about, and stripped down what I’m doing to a simple sketch example.

I need to figure out the depth order of lines in the scene, so that I can crop the lines in that order. It’s the Painter’s Algorithm problem.

That distance is shown by a red line in my illustration. 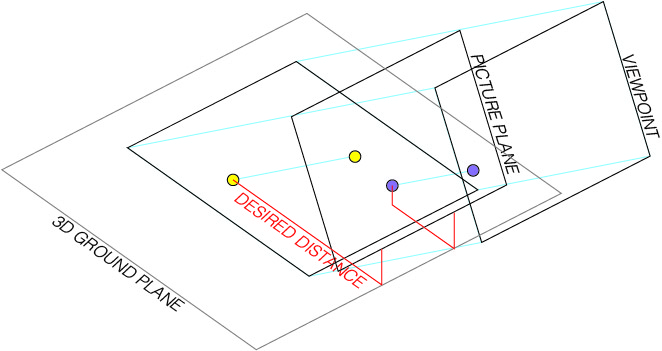