Try using the ‘global’ keyword inside the draw function.
This keyword is to be used if you want to assign the value of an initialized global variable inside a function.

Great question @CodeMasterX, and the answers by @SierraMike and @GoToLoop will help you solve this issue

Just to give you a bit more context of what is going on… in your code without modifications your local txt variable fails to be assigned in some edge case (I would guess it is when the mouse is exactly in the middle of the screen and no if clauses are True).

One solution would be at the start of draw() to assign txt = '1' (then you don’t need the global assignment, please remove it from the start of your sketch for clarity!) otherwise you should be using the global statement for the global variable strategy as the other answers have indicated.

You were correct, I fixed it now:

It is important to note that there are two variables named txt in your program, one being global, and the other one local to the draw function. Because the draw function contains at least one assignment to txt, and the variable was not explicitly declared global within the function, that name refers to a local variable by that name, wherever used inside the function, even if none of those assignment statements ever gets executed. Of course, your else block does guarantee that at least one of the assignments will get executed, but that has no bearing on the scope of that variable.

If you do display the value of the global variable, txt, you will find that it is distinct from the local variable by that name. To demonstrate that, add this function to your code, making sure that its header is not indented, and call it from within the draw function:

You can add a call to the function as the final line in the draw function, indented directly under the call to text, as shown here:

Alternatively, you can place the call within one of the conditional blocks.

Regardless of what happens inside the draw function, the print_the_global_txt function will always display 1 in the console when it is called, because it is accessing the global variable.

See official documentation at Python.org: What are the rules for local and global variables in Python?. It states:

In Python, variables that are only referenced inside a function are implicitly global. If a variable is assigned a value anywhere within the function’s body, it’s assumed to be a local unless explicitly declared as global.

In short, b/c the global variable txt isn’t used as such anywhere within your sketch, but only as a local variable inside callback draw(), you should delete txt = '1'; for clarity of intention.

BtW, semicolons aren’t needed in Python, unless we want more than 1 statement in the same line.

It says here that the variables declared at the top of the code will automatically become global variables. So why does it still need global? Is the tutorial outdated or for a different version of processing.py?

It says here that the variables declared at the top of the code will automatically become global variables. So why does it still need global? Is the tutorial outdated or for a different version of processing.py?

The tutorial written is correct and not obselete. 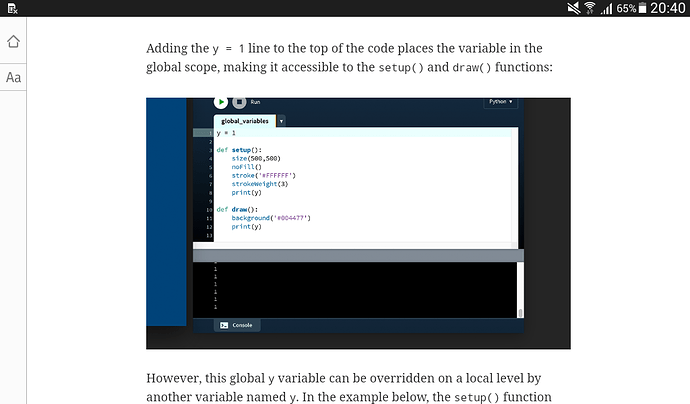 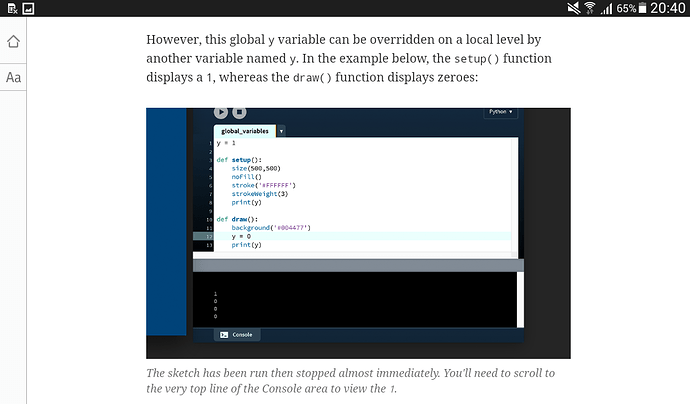 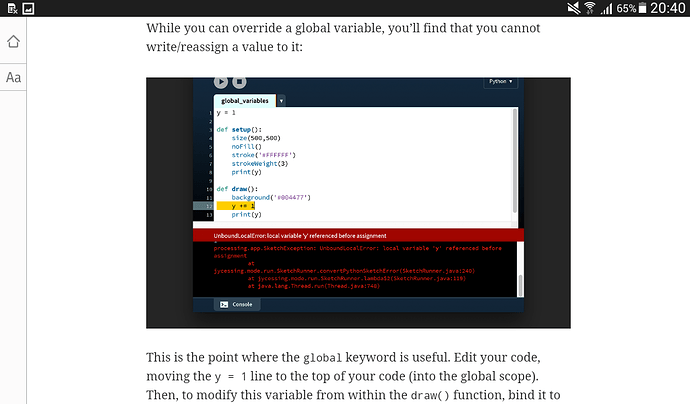 So why does it still need global?

You need to include the keyword 'global ’ only when you want to reassign that variable inside a function.

Here, you are reassigning the value of the global variable inside the draw() function.

If you do not want to include that keyword, another alternative is first overriding the value of the global variables inside the draw() function and then assigning them.

It says here that the variables declared at the top of the code will automatically become global variables.

Yes, that is true. However, if you create another variable with the same name within an inner scope, such as a function definition, the global variable by that name will still exist, but will not be visible within that inner scope, except with the use of some particular coding gymnastics, which are not covered in this post. So while you do have a global variable named txt, that name refers only to the local variable when it is used within the draw function.

That may seem like an arbitrary rule, at first, but I think it is a good language feature.