With this code example:

Interestingly, the touchEnded() function is still correctly executed when letting go of the second finger.

It’s easiest to test this by holding one finger steadily and then tapping with a second.

Tested on the following devices:

I’ve also looked at the processing code and the touches gets updated directly before triggering the touchStarted / touchEnded events, which means that both should have the same issue you described above…
Maybe you can check if the framerate drops or draw is called at all…

doesn’t seem like it drops the fps significantly…
I don’t really get what you mean by “or draw is called at all”, because obviously stuff is being displayed, so draw has to be called, or am I wrong?

This should show grey at the beginning,
then red if the last action was touchStarted()
and green if the last one was touchEnded()

Link to video of that code running on my Xiaomi 12 Lite
(Unfortunately I couldn’t convert this video to webp and post it directly here, sorry for the inconvenience…)

what you mean by “or draw is called at all”,

Meant maybe graphics is persistent by the devices graphicbuffer. Would be still displayed but without getting updates from draw.
But as far as I spot it correct in your vid the frameRate text is flickering 59/60. So it definitely gets updated …
Nevertheless, I tried it once more to reproduce it on my mobile (+ on my old S9 Android 10) but still no luck. All fine on my device.

I just “achieved” this by tapping shortly with 4 Fingers?
Console doesn’t show any Errors, and the last Event apparently was touchStarted() as the background is red.
I can easily reproduce this about every fourth attempt.
This screen stays until I tap (or hold) again. 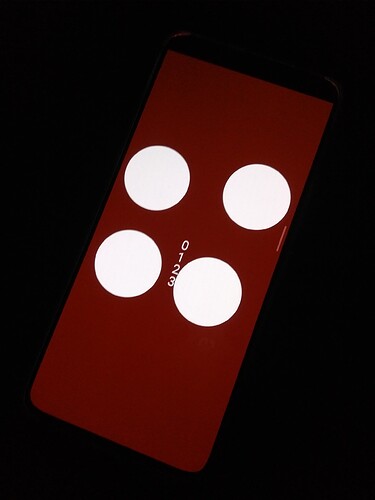 That’s on my mobile…

it only “works” if the first finger isn’t moved.
On my mom’s Galaxy A5 2016 it was a bit difficult as even if I didn’t move my finger, it sometimes moved the detected touch of that first finger.