Hey! i need some help,
i’m working in a code, and i have a question, can i uso bezier in a ellipse?
I need the shape of the ellipse to change as I go through it. Depending on the position of the mouse, the bezier position should change

Like, draw an ellipse using Bézier curves? For a perfect circle, the positioning of the anchor and control points looks like this: 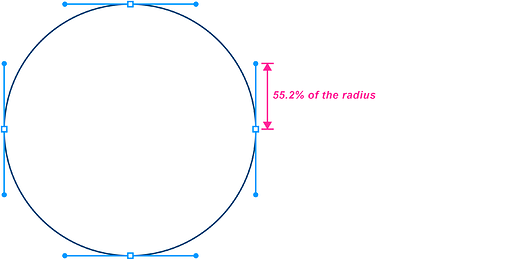 thanks for answering! I would need to create an ellipse (using the format (ellipse (float, float, float, float)) that can later modify its curves, but always keeping the closed shape of an ellipse, I hope it is understood.

As far as I know, you cannot modify the curves of the ellipse() function. This is why I suggested drawing an ellipse using bezierVertex() functions with control points that you can manipulate.

If the distortion is relatively basic – like, just squashing/scaling, shearing, and rotating the entire shape – you can use an ellipse() function along with the scale(), shearX(), shearY(), and rotate() functions.

Do you have an example/reference for what you’re trying to accomplish?